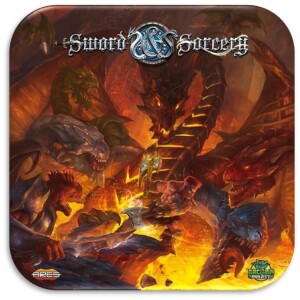 This is a summary of the board games that saw my most interest, investment, hobby time, playing and enjoyment in 2020. It is not necessarily a direct reflection of my all time favourite games. This was a year of lockdown and a reduced number of new arrivals with gaming mostly solo or two player.

1. Sword & Sorcery – my summer hobby project was to finish painting up the core box set, and boosted my interested in playing and collecting this game. I also painted the Vastaryous Lair expansion which is a beautiful additional set. The next edition of the game is called Ancient Chronicles and should finally arrive early next year and reinforce my ongoing enjoyment and regard of this game brand.

2. Altar Quest – a winter addition, this dungeon crawl is well designed and includes the ability to solo play with one or two heroes and still find a balanced and engaging game. Each hero has unique card abilities which play off each other, making replaying the game a lot of fun. Despite my reluctance to paint another game so soon, I have already started to tentatively paint up a two player set.

3. Thunderstone Quest – with the arrival of another expansion set this year, the game saw a period over autumn of solo and two player games, and i backed yet another future expansion kickstarter expected to arrive next year. This is one of my collecting games now, where i feel i have to keep adding the new content as i do not want to miss out.

4. Lord of the Rings LCG – still my most regularly played solo game due to its easy set up. I continue to buy cycle expansion packs to try and complete the sets before it goes out of print, which this year included the larger size adventure sets Mines of Moria, Khazad-dum and Hunt for the Dreadnaught. Whilst new content releases are now on pause, I do still have the very last cycle packs still to buy.

5. Blackstone Fortress – i finished off painting this set and added in the two larger expansions Escalation and Ascension as they were fast going out of print. White Dwarf continued to add some new content well into the year, although the game production content has now ended. These expansions may still get on the hobby list to paint up next year.

6. Hexplore It – i added the Dead King base set to my Forests of Admiron edition this year, as the adventure story this provides is a great experience. Owning two core sets already, i did not back the Sands of Shurax kickstarter but i have downloaded and started to play through the new story mode for the Dead King game, which is a neat new play style.

7. Vindication – this cube management adventure game has seen a resurgence in interest this winter with the latest expansion called chronicles being funded on kickstarter. It was also back on my gaming table playing the solo expansion, which does at least allow you to experience the game and tell your hero’s story against some simple mechanics.

8. Tidal Blades – an autumn arrival with some of the best production and artwork in deluxe kickstarter edition. Gameplay combines dice rolling and upgrades with worker placement and it is such great fun even. I am very fond of the mix of dice rolling and worker placement and this game alongside Champions of Midgard and has led me sell my copy of Kingsburg and its expansion.