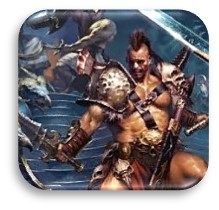 This is a summary of the board games that saw my most interest, investment, hobby time, playing and enjoyment in 2016. It is not necessarily a direct reflection of my all time favourite games. This was the year i returned to painting miniatures and played more solo games.

1. Warhammer Quest Silver Tower – i bought, built and painted up this game set this year, and time investment wise this has been intense as my main hobby project. The completed set looks great and i am proud of the results. White Dwarf has added extra articles and it is so good to have the Warhammer Quest brand back. This was the most exciting game release of the year.

2. Warhammer Quest Adventure Card Game – i played this game loads and wrote four new scenarios which has seen a lot of website downloads and praise on boardgamegeek. Developing these new quests and play testing took a lot of time to complete, but i am pleased to have helped keep the interest in this game going. It is such a great co-operative card game.

3. Lord of the Rings LCG – my most played solo game this year, as i worked my way through all the Voice of Isengard and Ringmaker expansions, and then bought and played the Lost Realms box and the Angmar cycle. It is a superb solo game, easy to set up and mixing strategy choices with superb theme and artwork. It is becoming a monster collection.

4. Descent 2nd Edition – last year this game saw the most home play and painting time, and i have still painted up a couple of expansions this year and also built a foamcore organiser insert for the core set. The Road to Legend app has brought new life to the game, and it now has a more co-operative element which is great news.

5. Runebound 3rd Edition – three new expansion packs were added this year, and it is a lovely looking game and a really enjoyable adventure with specific objectives to achieve. While other solo options provide tough competition, when i do play, i always really enjoy it and think i should play it more. The new edition with co-operative scenarios is preferred to older versions.

6. Battlelore 2nd Edition – one of the few games my teenage son will still play with me, a fantasy wargame you can actually get played within in a reasonable time period. Looking back I wish i had purchased all the expansions as they are now out of print and really expensive.

7. Lancaster – a heavier strategy game that i don’t own myself, but it had a really good run at the gaming group. We were sucked into the competitive side of trying to beat each other each week and so it saw more play than most games during a four month period.

8. Smallworld – remains a family favourite, and my son still really likes this game and it is often play when he visits his cousins. A great, easy to play game where the random combinations of armies appearing always keeps it interesting.