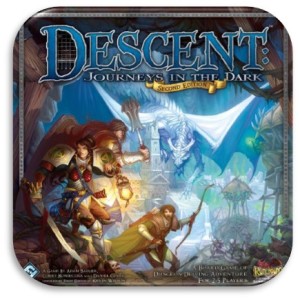 This is a summary of the board games that saw my most interest, investment, hobby time, playing and enjoyment in 2015. It is not necessarily a direct reflection of my all time favourite games This was the year i returned to the board gaming hobby, and was the start of some group campaigning.

1. Descent 2nd Edition – saw the most home play and hobby time by far, i painted up the core set and two expansions and invested more time and funds into this than any other game. I also wrote some new scenarios using the Quest Vault. It has been a very popular family game and is wonderful to own and collect a dungeon crawler again.

2. Thunderstone Advance – one of my teenage son’s favourite games to play, which has seen a few expansions added this year to build it into quite a large card collection, filling two large core boxes. I have a lot of game variety now and it has been great fun collecting it all.

3. Smallworld – the most played family game at home and also with other relatives when we meet up. I added some small monster expansion packs to boost the variety of the army options available. It is such a popular game which cleverly overcomes the domination failures of other territory games.

4. Imperial Assault – the gaming group played the core box campaign over many months this year. Whilst i personally own Descent 2nd edition instead of this, both games are fantastic fun with a very similar feel. This game does have some great missions and works well even in its competitive format.

5. Lord of the Rings LCG – this game still gets a lot of solo play, but after completing the Dwarrowdelf cycle last year the game slightly lost some interest as i have found Voice of Isengard much harder to beat. I have taken a break in play for the last few months of this year, but it still remains one of my favourite solo games and is very likely to make a return next year.

6. Battlelore 2nd Edition – a home favourite which has seen a few battles fought this year, most of which my son has won. A lovely two player battle game which remains relatively easy to learn, play and complete. This is a a wargame slimmed down into a boardgame and it is great fun. I added one of the undead expansions to the set this year.

7. Kingsburg – another family favourite which was expanded by ‘To Forge A Realm’ which which adds in a few extra ideas without changing the game too much. Overall it is a great worker placement game, with dice rolling forming a key part of the game, which is unusual for a worker placement.

8. Abyss – a beautiful looking undersea game with some of the best game art around and has a choice of box covers. I received the war version in my lucky dip order with amazon. A simple game mechanically to play, but needs thought to build a decent score by combining your locations with recruited sea lords.