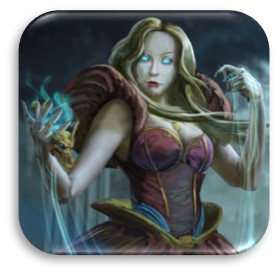 Hexplore is a roleplaying adventure questing game where you are taking on an evil adversary intent on destroying your realm. The game centres around your hero where you try to gather talismans or relic fragments, creating powerful equipment that may help destroy your adversary. Within the forest, Adrimon the sorceress is enslaving the forest dwellers, and players will be able to gain favours from the forest spirits, sneak into the cities, move though the fey-realm and interact with the Dryad, a powerful ally, and battle tough foes or release them from the Magi’s control to become allies. It is very roleplay centric in that you have basic skills to move, search for treasure and survive in the forests, alongside combat abilities of attack and defense and two clever mastery skills which is where the characters become unique to their role. The main part of the game involves you upgrading your skills board using a mark and wipe process, which i found works really well. 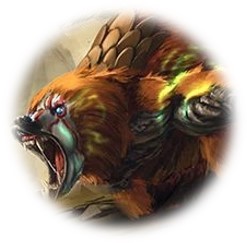 This game feels very freeform in its exploration choices, the game map will have quest destinations to visit where you know you will face a challenge to progress your story. The main enemy has its own count down progression which encourages you to keep moving and developing before the eventual showdown happens, and as you become stronger, progressively harder boss monsters will become defeatable.

The game is not overly complex, although there is a learning curve to know what you can do in city, shrines or ruins, and there are helpful component boards to refer to. It soon becomes second nature, although you will likely need to look up conditions, skills and new equipment regularly. As a solo or two player game, i really enjoy the journey of discovery, and as you play you will progress a characters storyline and increase their skills. The writing on event and quest cards provides theme and there is a nice story book too which adds background to certain events and enemies. The full game is a long one, closer to Mage Knight length here to get near the final showdown (although there are quicker variants), however the enjoyment really is in the journey, and i also found great fun in setting myself a shorter objective for instance to free Hathowyr the great owl or defeat Tharanos the rotting treant, and still have an engaging shorter game to play. I would have thought writing more bite sized objective scenarios would have been a good move by the developer.

The artwork and components of the games are excellent, and i loved all the boss monsters with their unique abilities. The wipe-able hero boards are nice to use and become a quite addictive element as you chase your next stat upgrade through the game encounters, and the additional extra storybook which adds background theme is a superb touch. The real joy of the game is the adventure story you are telling yourself, and the quest or event cards you reveal really help to tell it.

There are some different ways to expand this game once you have a core set (my additions highlighted green = own, blue = part owned, red = not purchased) :

There are three main editions of this game available, the original Valley of the Dead King, Forests of Adrimon and the newest Sands of Shurax, all being similar in concept and mechanics but have different themes and storyline weaved throughout the game. They also have different sets of heroes and powers available, which are interchangeable between the sets, and so the most obvious way to expand is to get another game version with the theme you like best. This is likely to give you the most new content for your money, as you get a lot of new heroes in each box, but is also the most expensive way to expand as well.

Each of the core editions has one main expansion which adds to the base game and retains the same set theme and these are known as the ‘return to’ editions. If you really like the edition you own and want more similar content then this may be a better option than buying another core set. You will get a little more of everything really, extra heroes, traits, races, enemies including a way to play competitively as the boss enemy.  These expansions also include some dual ability heroes which can make solo play a little easier using just one character.

These are pretty straightforward new card decks that add new encounters and perils to your game. Again there is one pack available for each game version and this is the cheapest way to add some variety to your quests.

One of the newest and most interesting developments is the campaign books being written which allow you to play a storyline game using all the components and maps, but reading story text and making branching decisions as you go. This is a very different way to play compared to the original freeform quest adventure, but is a welcome and fun addition. Currently the first adventure only is available on pdf format but there are plans to release a book of these adventures, one for each of the core sets.