My other hobby of sorts alongside board gaming is my hifi and music and i thought i would document my second hand Rega turntable history as i made another return to vinyl.

I grew up playing vinyl as a teenager and loved it, but like many, once i bought my first flat in the late 80’s and left home i moved to concentrating on cd play and sold off all my records. Whilst i have made many good decisions about my hifi over the years, this was on reflection probably the worst one i ever made.  It is not actually that i advocate vinyl as the best sounding medium, although it often is, the interaction with a table of putting a record on is in itself for me a satisfying part of the music experience.

Back in 2008 i became a little nostalgic and bought a Rega Planar 2 with the green logo and an AT-95 cartridge for £145, at a time before there was any proper vinyl interest around. I enjoyed playing with this for a couple of years while searching for and purchasing second hand records, before a desire to upgrade my amplifier and cd player led to a sale, and another clear out of records. This was probably a close runner up for the worst hifi decision i have made, and i really should have stored and kept this nice table for occasional use, particularly as i really liked the bright green logo style.  At this point though new or re-releases on vinyl were still quite rare and i had decided to shrink my hifi footprint.

A few years later in 2015, after i had moved house and my kids were a little older, i instigated my second return to turntables. This time a silver Rega RP1 with some modifications including a bias cartridge and RP3 style brace. I think i paid around £185 for this table, but i cannot honestly say i ever really loved it as a hifi item. I kept it a short while before selling it on as streaming took over my interest as a latest alternative alongside the cd player. One issue i also had at the time was that vinyl cost too much in comparison to a cd, and even charity shops started to ask higher prices for ungraded vinyl. However the general profile of vinyl was starting to rise, but the time was not right for me.

Moving onto the start of 2019, and my interest has again returned. Over the last couple of years i have bought the occasional re-release of limited edition vinyl for a few of my favourite older albums, and finally wanted something to actually play them on. An older head has in particular started to appreciate the size of album covers again versus cd inserts, with the ability to actually read the lyric sheets, and i have become fond of owning albums again.

I have made a considered return to try one more time, and while I was tempted to buy a new Rega Planar 2 straight off, i decided to play a longer game and test my resolve with another cheaper second hand table, which is after all half the fun of these experiments. So i bought a Rega Moth Alamo table with some modifications for £245, but i was particularly drawn to the included Nagaoka MP-110 which is probably the best cartridge i have ever owned, and a nice addition. The table also came with an acrylic platter, white belt, and alternative isolation feet. Sadly I needed a phono stage as well and picked up a Cambridge Audio CP1 for £50. For the sale of a largely unused headphone amplifier, i felt i did reasonably well, and was pleased with how it looked.

After setting everything up and learning about cartridge alignments, I have been really surprised how good this deck sounds, it gives my much more expensive cd player a proper fight, and some vinyl i picked up so far, both original or newer 180g ones actually do sound better and more vibrant than my cd version. I am not going to say it is a better format every time, as it is probably more down to the recording transfer, however for the outlay this Rega is an item i am really enjoying, and it has rekindled by love of playing music. 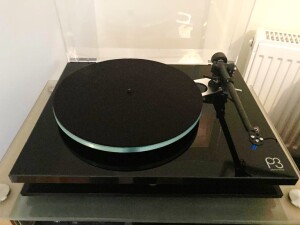 A year on, at the start of 2020 i made some more major changes to my hi-fi set up, selling my separate main Arcam dac and a small Oppo headphone dac that sat in a draw, and moved the streaming element of the system to another room. I went more fully into building a vinyl album collection in my main system, starting with a brand new Rega Planar 3 and Elys 2 cartridge, and selling the Rega Moth for slightly more than i paid for it, upgrading the Cambridge Audio CP1 to a Rega MK3 phono stage. It sounds amazing along with my Arcam SA20 amplifier which was also switched from the Arcam FMJ A39 i previously had. With some nice trading i managed to break even on the whole change over. I do not know if the journey is complete now, but one year on from doing this i have not looked back or felt the need to change anything again. The Rega Planar 3 comes highly recommended from me even against my older but much more costly Arcam FMJ CD37 cd player which i also adore.