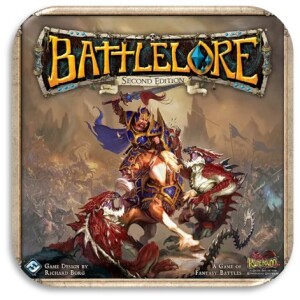 Battlelore is fantasy flight game from 2013 based in the Terrinoth world, and is a two player fantasy miniatures strategic battle that has a boardgame feel and an accessible play style. Played on a hex based board with terrain overlays, you build an army from a pool and place them out in small units at the start of the battle, and this can be done in secret in a fog of war style. Your objective will be to obtain victory points from the scenario selected, and is mainly achieved from capturing and holding special places of strategic interest on the map. You can also win by destroying all the other players units and creatures. 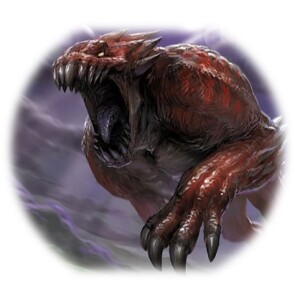 In the core box are two armies, a human Daqan Lords army (blue miniatures) fighting against the more monstrous chaos based Uthuk Y’llan (red miniatures). These are well balanced, with units in each side having unique skills and attributes which can change your tactics depending which ones you brought to the battle. The board map is split into three areas, and you will use a deck of command cards, from which you select your activation each turn, either the left, central or right area or a combination, and this limits your options each turn, and makes timing the decisions of when to issue orders to units more important. In addition you can earn and play lore cards that allow you take additional special abilities from spells or events, boosting attack or defense.

Combat is very straightforward, the custom dice in the game work well without being over complicated, and to attack you roll a number of dice based on the units attack value. Double and single swords are hits for melee units and a bullseye for ranged hits, lore symbols will give you one lore token, the crown symbol is used to activate a unit’s special ability if they have one and a flag will push the enemy into retreat. Once an attack is resolved, a counter attack is then possible if the enemy unit remains adjacent to yours. 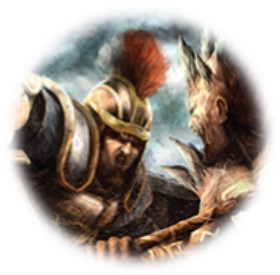 The fantasy theme and artwork is great and the miniatures, complete with some interesting creatures, look amazing on the terrain map, and you can paint them for maximum effect. For a strategic wargame the mechanics are straightforward, but offer enough choices and depth to be interesting, and playing command and lore cards at the right moment adds to the enjoyment and feeling of achievement. This game succeeds at distilling a wargame into a board game, and is fun to play without overstaying its playtime. The scenario victory points win condition however does feel like a limitation are are not always balanced evenly, and i would have liked more variety as it can become a race to complete rather than a focus of destroying opposing units.

I am most disappointed though that the game went out of print early, the expansions covered below are largely impossible to get now and the highly wanted elf faction never came out. This is a shame as the game could have been so much more, but that said the core set is a great game in itself and is worth finding if you want to experience an easy to play wargame.

An expansion army pack was released for each of the two core set factions from the core set, Hernfar Guardians and Warband of Scorn. These each add 4 new units with miniatures, cards new terrain tiles to mix up your army selections each game. If you want to play many games, these are probably essential purchases to add variety and keep things interesting. Missing out on buying these is a source of regret as i just did not realise how much i would like this game long term. 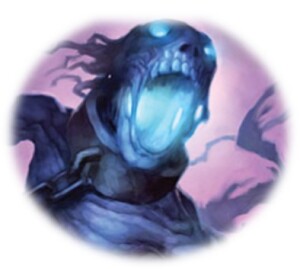 The undead faction was added across two expansion packs, Heralds of Dreadfall had units that were very well balanced to the core set and included skeleton archers, reanimates, deathknights, wraiths and a barrow wyrm, and this was the one i picked up as i still believe it is the best addition. The second pack Terrors of the Mists included reanimates, bone horrors, barghests, necromancers and a banshee. Both packs also had new scenarios, cards and terrain and again on later reflection were must have items if you wanted to expand your game.

There were three smaller expansion packs that added in a new neutral creature for either faction to use, the Razorwing, Dragon and Giant. Each came with a new scenario to play linked to the new miniature. Whilst not as essential as the army pack additions, these are still nice to change up the game.