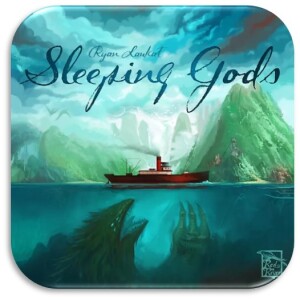 Sleeping Gods is a campaign exploration adventure game where your steamship called the Manticore and its crew of nine led by Captain Odessa are lost in a strange world in 1929 . You must discover a way to return home by investigating a series of islands on an atlas map, uncovering its secrets and seeking out various totems. 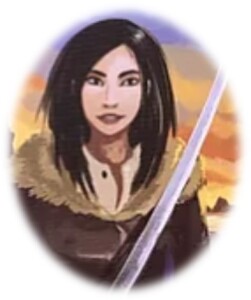 Your crew each bring unique abilities to help complete challenges or defeat enemies in combat. As you explore the world you will encounter events, read from a large storybook, and make decisions on how to progress, with your game driven by the quest cards you uncover and special items you find. These quests give you clues to map destinations but everything is not always visually obvious, so you will need to explore areas to find things out. During your game your crew and ship will take damage and become fatigued from their actions, so you must visit ports and markets to trade, heal your characters and repair your ship.

There is a good balance to this game, every challenge you face will require you to add fatigue to your crew member, so using them is limited without spending time or resource to remove it. In addition you will collect command tokens each turn which you can use to take extra bonus actions such as cooking items to heal characters, activating a special item your found or special actions that crew members have. There is a fine balance of exploration, ship and crew management and obtaining resources such as food or wood supplies, and there will be a nagging need to recover fatigue, health, repair the ship and pull back command tokens that are running scarce.

Combat can be a make or break for some of these games, and Sleeping Gods has a system of making a hit roll by turning over fate cards, then making modifications using commands tokens if you can, and when you do hit then allocating set weapon damage across the enemy cards in slots for head, body, legs and covering up the enemy reactions, health or damage dealing attacks. It really works well and gives you some nice decisions to make on which crew to use and which enemies to remove first, without being too much of a side game. 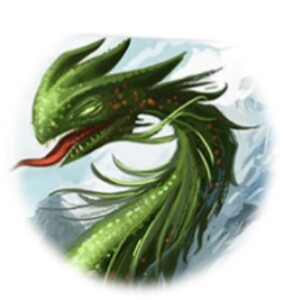 Similar storybook games would include Tainted Grail and Middara, and to a lesser extent the hidden island exploration of 7th Continent which does not have a book to read from. Overall this game is one of the better implementations of a storyline adventure experience for its smooth integration of obtaining quests via keywords. It has nice bright artwork and all the components are excellent. Gameplay can be undertaken solo, but with nine crew members there is quite a lot to keep track of, and this game is particularly good for two players, where you can share the discoveries and surprises together and split up the crew between you, however for higher player counts there is not quite enough character depth to keep everyone interested. It is also a game best left out on the table between sessions if possible, as while it is certainly possible to pack away each time, it is time consuming to restore all your characters and tokens.

Why i chose not to keep it …

The whole adventure here is involving, interesting, fun to play and also clever and i had a huge amount of enjoyment playing through the campaign twice. However as with most games like this, once you have revealed its content there remains less desire to replay the same game story as the challenge is removed and it becomes a memory game. The game is built as a succession of side quests and you will not uncover the whole thing even in a couple of plays, and it remains a game i really enjoyed discovering, but the time came to move onto another adventure and invest elsewhere.

This is the main storyline expansion for the game currently containing new storybook, altas islands, and cards for quests, adventure and markets. Pretty much more content to add directly to the core box and is the best way to expand if you want more game.

This was a kickstarter exclusive with different types of dungeons to explore as side missions. There are some questions over how much this may unbalance the core adventure given you will collect new items but also take damage during your exploration time here, and as such is a nice to have addition rather than a must seek out one.

This a set of modular add-ons which upgrade components such as metal coins and ship, wooden resource tokens, a journal and battle mat. Whilst these make the game more tactile i am not seeing huge value here in terms of their impact as you already get some wooden tokens and thick card stock.