I have had the pleasure of building, painting and playing campaigns in all three modern Warhammer Quest games, and i felt a comparison would be a nice idea. The advantage of the two fantasy sets are that they have a huge amount of compatibility, being able to transfer heroes and enemies between the two campaigns to add variety. If you like the action dice slot mechanic used, then you will likely enjoy playing all of these games.

ver Tower is a little different to the original Warhammer Quest title, it is set in a tzeentch tower rather than a dark dungeon, with bold colourful tiles which often have some unique hero interactions built into them.  You receive a relatively short rulebook and a separate quest guide from which you read passages as the story unfolds. The lay out of both tower books can occasionally seem a little muddled, but adventure tile cards will reveal which passages to read as you progress. Hammerhal is much more a traditional underground dungeon, a dark and grim theme, you will predominantly encounter khorne and nurgle creatures. The box and book artwork here is closer to my personal preference, and the rulebook comes much thicker with loads of background storyline, plus a nice painting guide is included. The rules seem better organised, and each campaign dungeon is set out neatly in the adventure book for a gamesmaster to use. Blackstone splits it’s books even further into background, rules, combat and campaign, and are nicely presented and laid out albeit remembering which book you need is a pain. The space station campaign theme and docked ships is really strong in this set, with the fortress changing shape each time you play, and slotting in new encounter cards is well designed. Overall for me Shadows over Hammerhal edges it from Blackstone Fortress, the huge Cinderfall city theme with its varied districts opens up an expansive world, and i will even occasionally pick up the main book and flick through it when i am not playing. However there is much to enjoy in the futuristic space setting as well.

Balancing off against the artwork and books production are the high quality plastic miniatures. It is here that Silver Tower excels, with 6 excellent hero models and a host of varied enemies including grotlings, acolytes, tzangors, skaven deathrunner and the amazing ogroid beast.  Hammerhal has 4 great heroes of its own and a gryph hound, with enemies comprising khorne bloodreavers, acolytes and my favourites, the putrid blightkings, but overall it cannot compete with what Silver Tower offers, being a little too humanoid focused, although the acolytes provided in this game are improved on Silver Tower. Once both sets are painted up, i feel a greater sense of pride when looking at the Silver Tower set with its more unique model builds, but the good news is that models can be used and interchanged between the two games. Blackstone Fortress stands alone for using its models, but comes with 8 individual heroes and real variety of enemy groups including guardsmen, chaos enemies, mechanical drones and ur-ghul creatures and is a comprehensive package of great models too. Overall Silver Tower and then Blackstone are better complete sets for miniatures variety and hero choice, and were also more enjoyable to paint up.

Tiles are very individual to each game and all are really nice in theme and style. Silver Tower are bright and colourful with interactive items located on the tiles, while Hammerhal is darker and more dungeon like in appearance with chaos symbols, skulls and fiery locations. Blackstone is metallic spaceship related with hex based spaces, and generally dark rooms are interspersed with neat lighting effects. In terms of other components, Silver Tower provided sets of different coloured action dice for players to use and identify with, something that Hammerhal and Blackstone left out to their detriment, but Blackstone counters well with different dice types for combat strength which enhances the play variation, and has additional card decks for encounters and discoveries, and seal-able baggies for saving games. Overall Blackstone Fortress goes that little bit further as a whole package, and Hammerhal apart from it’s really excellent background book, feels slightly less in component content compared to the others, but the most important factor may simply come down to the location theme and art style you prefer.

All three games use the same dice slot allocation mechanic for actions, feature extra destiny dice and renown and are built with the same core gameplay feel. However, there are some key differences which may split opinions. Silver Tower and Blackstone run a fully co-operative approach, with cards and dice generating the adventure, and enemies using artificial intelligence, while Hammerhal offers up a gamesmaster experience,  controlling the enemies, revealing hidden secrets, and providing or embellishing the general storyline. I prefer the co-operative approach, but having played a Hammerhal campaign as both gamesmaster and hero at the same time i found it lost little by using the AI to run the enemies, and still enjoyed keeping a secret until it was needed. Silver Tower is unique in that each adventure can be scaled for different hero numbers, while Hammerhal and Blackstone largely expect four heroes to participate each game. In campaign terms, Hammerhal has a city to visit between adventures, experiencing encounters, adding to the overall theme, and Blackstone has a space station with docked ships. Hammerhal features a long pre-written multi level dungeon campaign which is well designed but is then the same each time, while the others randomise room order and encounters to vary repeated adventures. Silver Tower scenarios offer a little more quest variety and storyline and certainly feels better for engaging one off adventures, but the other have better campaigns. Each new game released has slightly improved the rule set, Hammerhal benefited with the removal of respite, and added an ability for players to search rooms for hidden items, and Blackstone has the best turn order mechanic, better combat dice and is a slicker design with more challenge. Monster AI is handled by simple table rolling that i feel works better in the two fantasy games as Blackstone requires individual rolling and table examination for every model which can become tiresome at times. Blackstone Fortress is a slightly more polished game overall, with Silver Tower a joint winner for it’s different player count design.

Expansion content is always key to the enjoyment of games like this. White Dwarf magazine made a way to join up the Silver Tower with Hammerhal editions which was a nice touch, and Silver Tower and Hammerhal added card packs so you can expand heroes and monsters yourself. However sadly new campaign storylines such as an undead or orc dungeons were never added, and Hammerhal in particular needed one to keep it fresh. Blackstone Fortress received a lot more design support, the addition of the Dreaded Ambull monster hunt is excellent, plus they expanded into small box enemies such as traitor guard leaders and a nurgle enemy box, and then a large box expansion too with new campaign material. They are now bringing Blackstone Fortress to a conclusion as well, but its overall content, should you wish to pay for it, far exceeds what came with the two fantasy boxes and is more on a par with the original 1995 quest game. Silver Tower is a great individual product, and the ability to play with less heroes is very desirable for many groups. Hammerhal could have been amazing, if it had been expanded with a new campaign book or two, but it was a poor decision to drop the line too early to enable the release of Blackstone Fortress. 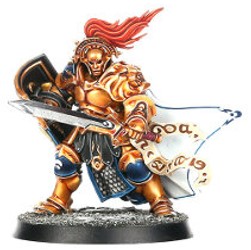 All three games are great to own, being relatively simple designs to learn and play, capturing a dungeon feel with a story and light campaign, albeit not as strategically deep as some other crawlers, they are quick to teach and great fun. They are also for me the most enjoyable modelling game sets around, providing a great hobby experience with a fairly simple dungeon style adventure. Overall Silver Tower and Blackstone Fortress are the better value one off sets for their model and component content, but Hammerhal fights a case with a great background theme and more of a controlled dungeon master experience, which could allow you to create your own adventures in the future if you put in the effort. Blackstone Fortress has become the fullest for additional content, with new expansions, a properly expanded storyline, new enemies, magazine content and even an annual, and so i would have to say Blackstone Fortress offers the most immersive value, with the best rule set. However, if you do not want to be sucked into buying costly expansion sets, especially once out of print, then Silver Tower shines as it is largely self contained, and does have some storyline events to read out, has great models and is scale-able to player numbers. There is not really a wrong decision, owning all three could be considered overkill given the mechanics are similar, but if like me they are a hobby for you, then it is all good. Personally for me the fantasy theme of Silver Tower & Hammerhal as a combination of sets is favoured over Blackstone Fortress.

The original 1995 Warhammer Quest is still the most traditional dungeon crawl featuring creatures such as bats and spiders, enemies such as goblins and orcs, and a roleplaying sandbox approach, with levelling up of characters that has not been beaten since. This older classic has really expensive out of print prices, but it is a good option to consider, especially as the prices for the newer versions increases as they also out of print. Whilst the gameplay in this box is quite simplistic compared to more modern dungeon crawl games, it remains for many players the definitive random dungeon experience.  Games Workshop could just re-print this game and just upscale the model quality and it would still be a huge best seller, but they are preferring to expand their new series instead, and so i cannot see this ever happening now.

The newest version of this series was called Cursed City released in April 2021 and it is fair to say it is a great box set. It comes with an undead theme, something i was looking for as an expansion to Hammerhal, and it seems that Games Workshop rather than expanding one of its sets into multiple themes is going to continue with separate new game sets being based around one location setting. This new set blends some of the better ideas from the previous ones for me, as its theme and artwork is the best yet, and the models are amazing. Sadly its continued support via expansions was cut short so this is not full of expansions like Blackstone Fortress, however in terms of a built and painted set in my opinion so far this is best one of the series alongside Silver Tower.