Gloomhaven – Jaws of the Lion 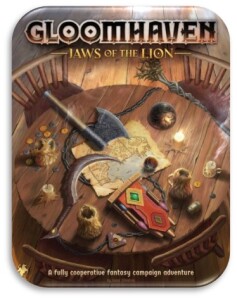 Jaws of the Lion is the introductory stand alone box set released in 2020 for Gloomhaven, containing 4 new starting hero characters and 16 monster types along with a more focused and shorter campaign story. The original game released in 2017 is well documented for being such a huge box of components that it can feel overwhelming to find what you need and set it all up. The aim of this set is to walk you through the rules in a step by step process and just make everything more accessible. 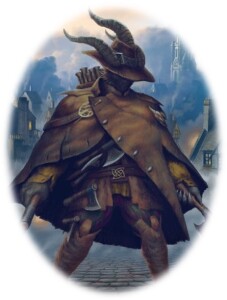 Gloomhaven is established as one of the all time great tactical dungeon games, with a huge interlinked campaign, unlockable heroes and branching paths to the story, and it has seen more gameplay with my group than anything else.  Driven by card hand management, this is a legacy style game where you undertake tactical missions. Catering well for different player numbers, a choice of six starting characters will eventually be retired to bring in new ones to the game. Game balance is well executed, scenarios are closely fought and monster difficulty is easy to change using statistics discs. Combat is card based choosing two cards to combine and play each round, and these also represent your stamina so discarding too many by resting or using best skills you will become exhausted. A small deck of adjustment cards during combat provide an edge of randomness and can be customised over time, and there are no dice involved in the game at all. As a tactical campaign adventure with branching storyline pathways, this game is amazing, and my Virmling Mindthief will be fondly remembered forever.

Gloomhaven even though it is a great group campaign game is not perfect, and is more a series of strategy combat challenges than a roaming dungeon crawl and it is not really a game of surprise explorations. Components are decent enough but are not best in class, with enemies are standees and tiles are low on differential detail, and the light storyline of the original seems to get confusing and lost over time. As a tactical puzzle game though it excelled within a group setting, but i found it much less engaging to play solo even though i wanted to at times, with time consuming set up and slow character progression an issue unless you have unlimited playing time.

Jaws of the Lion is amazing at what it does, it has a smaller tighter story to follow so you do not feel lost, and the way it slowly adds rules makes it easy to learn and follow. It comes with token trays and a good rules guide and restored my interest in the game. The maps are also played off a couple of books rather than having to find tiles which is an improvement too. If the original Gloomhaven box was also split into smaller manageable short campaigns it would for me have made a better product. Nothing significant has changed to the gameplay, and heroes in both sets are compatible across both game editions.

Jaws of the Lion is the version of the game i would recommend getting first, as it is manageable and complete in itself, and you can always expand into the huge Gloomhaven box afterwards if you feel the need to get more content. Overall I was really impressed by it’s design and for now it retained its brand position in my collection when my interest was waning. Having played through a huge chunk of the original 2017 box i have now sold it on and just kept Jaws of the Lion for occasional play, and painted up the four models. 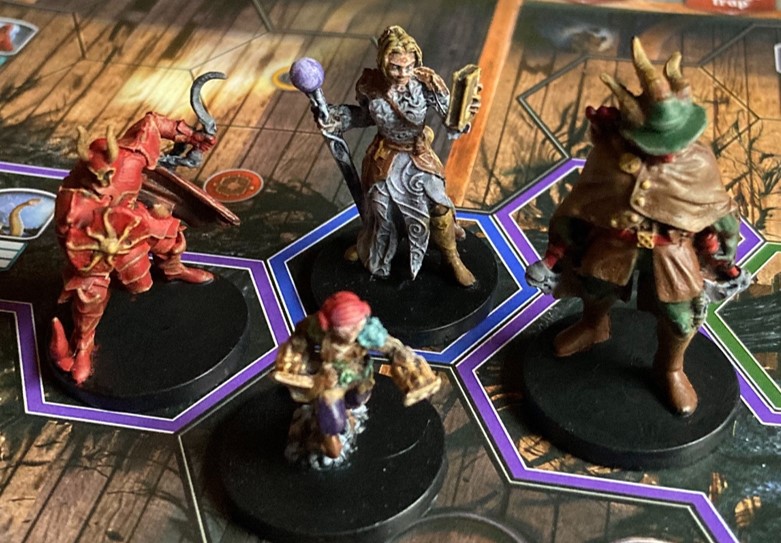 A set of 17 scenarios and 17 item reward cards specifically designed for strategic solo play highlighting the strengths and weaknesses of each class from the original Gloomhaven. Meant to be played with hero characters at least level 5. A good addition if you want to solo play.

A small box expansion features a new storyline of twenty scenarios taking place after the events of the original campaign and involve one new character class, Aesther Diviner. The expansion also features four new monster types, three new bosses and fourteen new items. I feel you are better spending on both Jaws of the Lion and the main Gloomhaven.

A whole new big box stand alone version due in 2022 and the most backed kickstarter ever. The gameplay changes proposed appear fairly minor but the winter setting is great. For now i have decided not to back it as a friend is getting a copy.