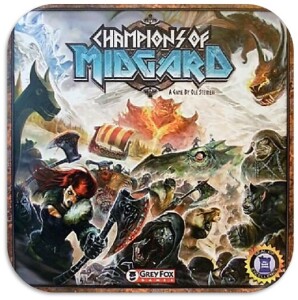 Champions of Midgard is a competitive worker placement game with dice rolling and a viking theme. The aim is to take your clan and by defeating epic creatures gain glory and the favor of the gods, earning the title of Jarl, as the champion of Midgard. 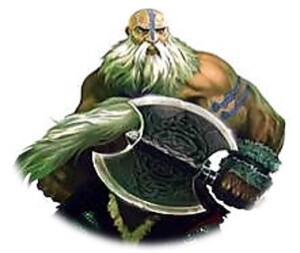 This game is a pretty standard worker placement but with a twist, you will be sending your clan to collect the usually required resources to feed everyone, build ships and carve runes, but also you will send warriors to defend the village from trolls, or go on journeys across the sea to defeat monsters and gain the glory needed for victory. In this game warriors are represented by dice, an alternative resource for you to collect, which come as swordsmen, spearmen and axemen, each with different strengths for all out attack or defense. Each player also has unique leader with a special ability that will help them through the game.

Combat is pretty straightforward dice roll of the warriors you sent into battle, with successes defeating the monsters and shields allowing your to parry the response counter attack. Dice will be gained and lost quickly at times, but by sending more warriors you can stack the odds in your favour, although more warriors will require more food. There are also favour of the gods tokens you can obtain to allow you to re-roll dice. The mythical monsters to fight are where the greatest points can be earnt, but they also take extra resources to prepare for battle and you are likely to lose warrior dice in the process of sailing the seas to get to them.

There are many ways to build points, including shipbuilding, rune cards adding quests to complete, and monster colour sets earning bonus victory, and you can even lose points by choosing not to take a turn to defend your village.

I really like worker placement games, but many can feel a little dry and lacking interest as you build a strategic points generating engine, or have run away winners. However this game blends a great viking theme with dice rolling to add an extra layer of fun and a little randomness to events. Fighting monsters is just a neat addition, and playing well is still likely to push you towards victory over the dice rolling luck. The artwork and theme works really well here too and over time this has risen to become one of the worker placement games i have loved and kept, although i have never really felt a burning need to expand it.

A more standard expansion which extends adventures into distant lands, where you trek into the dark mountains to fight giants and liberate archers who provide a new dice resource to use. It also adds the ability to play with up to five players and includes new journeys, enemy types and more rune cards and market tiles. This is an expansion for those that want more but do not want to change the gameplay too much.

The more complex expansion where you are rewarded when your warriors die in battle, adding in a new valhalla location that gives you access to new rewards such as relics and berzerker or shieldwarriors to do battle for you. There are also new dice and powers for your leaders who play a more important role in the game. This expansion adds a deeper layer of strategy to the game but will extend playtime and difficulty.

There is a neoprene playmat you can find which cover both the core game and both expansions and even some limited edition dice.