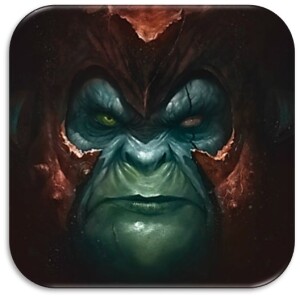 Abyss is a card drafting game where your goal is to gain the most influence and rule the undersea world. Its original release in 2014 came with five different box covers to choose from and i ended up in my lucky online order dip with the warrior version. This is another great family game that combines a neat theme with some of the best artwork around. 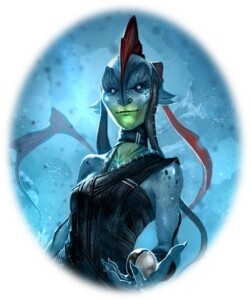 The game utilises a simple set of actions, as each turn you reveal a series of small undersea minion allies cards from five different factions or colours one at a time, with different values of one to five, and deciding on each one whether to take the card and end the process that turn or pass, which will then allow other players to buy that card using pearls. Any cards not taken build into new decks on the board, one for each colour, which can be taken by players instead of moving through this push your luck draft. Alongside this you can also choose to fight sea monsters in the depths to gain pearls, keys or influence points in a different way using a side board.

Combining the allies you collect will allow you to recruit larger card undersea lords to help your cause, and each will bring you different abilities for either instant or future use, or maybe give straight up influence points or provide keys which can then unlock undersea locations. These sea locations will enhance your victory points position at the game end, often combining influence rewards with either your allies or the lords you have recruited. It is a game with a points salad victory point scoring system, so you will not be sure who has won until you count up.

This family game has fairly easy mechanics to learn, however the secret of combining lords with locations is key to success. There is a neat element of pushing your luck on the initial card drafting each turn, and then looking to recruiting the best lords available for your strategy, often racing against another player to get them. In this particular game, the expansions really added some extra rule depth and choices to improve longer term gameplay and as a result my opinion of this game continues to grow, and i just love the theme and beautiful artwork.

A small box expansion that adds new wild card kraken allies, some new lords and the black pearls, a dark currency which gives you access to the lords more quickly but comes with a price as they bring negative influence if you cannot rid yourself of them before the game ends. There is also some new loot you can add in and a kraken miniature, held by the player with the most black pearls. A good game addition.

This expansions replaces the monster threat track by a new side border board where leviathan creatures will emerge. As you explore the depths, revealing a monster enables you to fight a leviathan. There are also some new lords and allies will help you with these fights. A miniature is awarded to the player who has killed the greatest number of monsters for extra influence points at the end of the game. This expansions is engaging, adds great creatures and is the best one to add.

A neoprene mat is becoming available to replace the main board, with great artwork it could be a nice addition if you love the game. Also there are branded card sleeves on the way too.