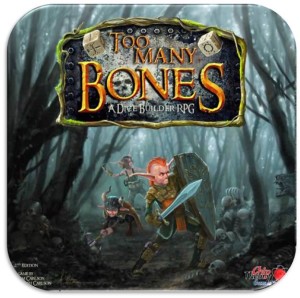 Too Many Bones is a kickstarter game which arrived in 2017 which combines an adventure with your gearloc heroes with tactical combat battles. It features dice building character development in a role playing format, and is a co-operative game which has developed, grown and improved its content over time. It is not a cheap game, but I can re-assure you that in terms of its content and quality, you will not feel short changed. The core box is big and beautifully designed, and opening will be joyful experience as huge numbers of amazingly coloured and detailed dice await, it also uses coloured neoprene playmats for the characters and battles, and they are also fabulous to use with neat spaces to slot in your dice as you roll them. Finally you get round chips, red health ones are plastic and nice enough, but there are weightier premier chips that i can recommend as an upgrade as they feel much nicer in play. Tyrants, monsters and character chips are already weighty, with excellent printwork and shine to them, they are simply lovely to use. 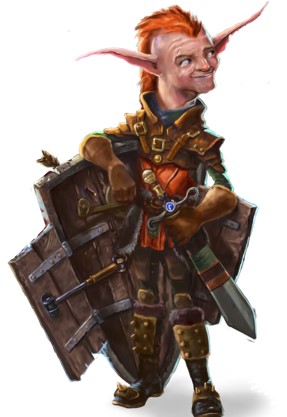 There are 4 gearloc characters in the main box and when you start to dig into their variety it is actually an amazing amount of gameplay. Each gearloc has its own dice sets, with unique abilities to unlock which sets them apart, you will never get close to using them all in one game so the replay options are huge, even for one character. You will be upgrading your gearloc as you play the adventure, deciding each time whether you need health, attack, defense, more dice to roll or work through its skill trees. Your gearlocs will undertake an adventure with the goal to defeat one of the six tyrants, having encounters via some lovely textured cards, which form a mix of enemy battles and other varied adventure decision choices. Battles are at the heart of the game, and generally are tough to win, but immensely fun, and the small battle mat is great, making movement, targets and positioning important and visual, but still not becoming overly complex its general execution. The game is very tactile, rolling the dice and moving chips around is lovely.

There initially seems a lot to learn in this game, but don’t panic as you only really need to learn one gearloc each at a time, and there is a turn walkthrough in the rulebook and youtube tutorials the developers have many available. Part of the fun is getting to grips with a gearloc and learning its abilities, and there are excellent reference cards which makes the general usage easier to cope with, just look up what you need when you need to. Everything makes thematic sense when playing, and whilst beating a tyrant will be tough and may require knowing some of your characters best strategies, there are easier game level options provided in the rules to play first. 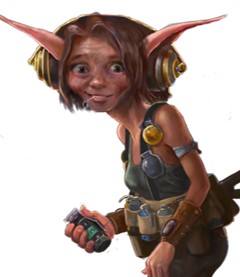 Overall this is a superb game. It is an adventure, it is also a tactical battle game, and it also feels like role playing, where you are gradually developing your character. It works amazingly as a two player game, and has a wonderful solo experience, either playing as one or using two gearlocs. Kickstarters have changed board gaming forever, and its depth of gameplay and longevity is quite astonishing, with alternative skills, combinations between the gearlocs and a quality of components beyond what we usually see when buying board games. I see this as a game that lasts, even after many hours of playing. You may initially pay more for it, but when it delivers high quality, more gaming hours, choices and enjoyment then I am all for the new trend, and you will need less games in the long run.

If you would like to see an example of a gearlock in more detail, here is one of my favourites from the core set > Picket

This game has been expanding for years now and there is lot of extras you can add (my additions highlighted green = own, blue = part owned, red = not purchased) :

Six new individual character boxes have been added providing new characters to play the game with and include – Ghillie the scoutmaster who has animal companions and uses traps, Nugget the treasure hunter who uses treasure items and has both melee and ranged abilities, Tink the bot builder who builds mechanical devices to use in combat and is one of the most complex, Gasket the hydromech and a steam powered machine,  Dart who rides a cool pigadillo and the Lab Rats who are apprentices that combine and work together with different individual mats. Which ones you want to add probably depend on your play style preferences and i have purchased them all except Gasket and Lab Rats so far.

A new bigger box expansion but also stands alone as a smaller full game in itself as a new entry point. Two new gearlocks emerged, Duster the shadow assassin with a wolf companion and Stanza the minstrel who plays music to generate abilities. There is a new riverbound storyline encounter set, with new enemies and tyrants and a tweaked battlemat. This can be a good place to try out the game or if you only have the core set and want something more, then this comes with new adventures and great gearlocks so has a lot of extra content in one place.

Adds in a host of new enemy chips and encounters. This is a pretty straightforward chip and card content addition and a great expansion, which i would recommend to vary up your adventure pool once you have played a few games. It is a simple way to create new adventure content into the start up boxes.

A box that creates a campaign letting you carry over characters from one game to the next, and adds in some new starter encounters. I feel it is a less essential purchase overall as most adventures already last long enough, and i am always more than happy with my one shot games. Tying the tyrants together into a longer campaign is quite loose rather than being full narrative story driven in this case. However that said, the extra sets of start of day cards are very useful to vary up your early game as that can become a repetitive area of the core game, albeit a short one.

Various component upgrades available include neoprene adventure maps, weighty premium chips and dice and chips trays. All of these i do have and would recommend if you have the budget to upgrade your game outside of new adventure content. If i was to pick one though it would be the premium chips.

This one is the luxury item, a massive trove box to hold all your game in one place if you really want to splash out. Sadly it was a step too far for my budget against buying new content, but it is a very nice product.

A new add on side game where you build your own tyrant to fight against while you undertake an adventure. If you are looking for even more variety then this may add it, but personally i have not yet purchased this as the amount of game i already have is so extensive, and this is focused on building a new enemy adding to the game time. There are some neat tyrants that are included in this box, that may cause me to reconsider one day.

As for the future, i have little doubt there will be more content or a side project built off Too Many Bones. If they were ever to turn this into a dungeon crawler, well that would potentially be the best game ever in my book.