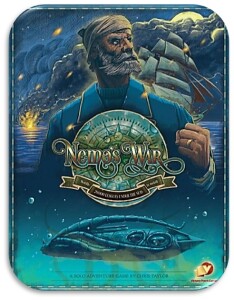 Nemo’s War is a game designed specifically for solo play and was upgraded and released in its current form in 2017. Its theme is firmly based in the Jules Verne’s classic novel, Twenty Thousand Leagues Under The Sea, following the adventures of Captain Nemo and his crew aboard the Nautilus. You will captain the submarine, and choose each game a motive to search for treasure, discover scientific knowledge or wage war, and each will change the end goal emphasis for success.

The game is a dice roller, but merges an adventure storyline with strategic battling against the ships which slowly fill the oceans of the earth, and which you must keep under control. Sinking ships will bring salvage that enables you to upgrade the nautilus with cool new gadgets, but comes with higher notoriety that can be your undoing. The game flows smoothly and each round is not overly complex, with most actions allowing you to wager extra influence on the dice roll, by gambling the welfare of the crew, the ships hull or Nemo’s own abilities, looking for a five plus success roll to pass various tests. There is a constant push your luck element mixed with a mitigation, so you are not completely at the mercy of the dice rolls, but can take actions to improve your chances. You also have crew cards which can be sacrificed to bail you out of a tight spot.

The game has a real theme and nice fitting artwork, and what makes it great is the adventure events deck you randomly build each game which reveals encounters drawn into a story. These adventure cards can have good or bad consequences but continually bring theme into your game. Whilst it is very much a dice roller, gameplay is strategic in nature and over time you will learn hidden depths such as how to place out new ships to the oceans to your best advantage. However it is really tough solo challenge to score highly, and i find surviving is a good measure of success in itself.

This is a game about choices, topped off with great mechanics, theme and nice adventure story cards, plus deciding how to upgrade your nautilus each time can be really fun. There is an option to play it co-operatively and even an expansion coming that will add a competitive mode, but for me it really is best as a solo experience, and a really great one too.

There are small expansions you can add to enhance or change the gameplay although these are all wrapped up in an ultimate edition now (my additions highlighted green = own, blue = part owned, red = not purchased) :

These include two cloth bags which are quite nice for the ship and treasure tile drawing, and a cloth board which is not overly useful at all.

There are 3 small expansion packs, Nautilus Upgrades which focuses on 12 new upgrades for the submarine, Bold & Caring featuring two new motives for Nemo, with Adventure and Humanist, and Dramatis Personae which has 9 new adventure cards and an extra finale. These are all useful for solo variety adding in different game aspects, but the Nautilus upgrades are my favourite.

The latest add-on with a competitive mode, new character tile, nautilus upgrade cards, two new motives with piracy and world order, four new finale cards and most important over 40 new adventure cards to increase the variety of your encounters. It suggests this may wrap up the game, we will see.