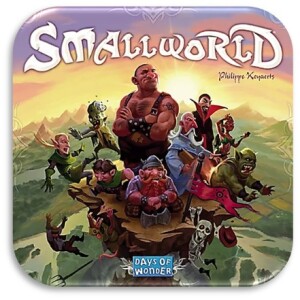 Small World is a conquest game released in 2009, where fantasy armies are trying to control a world map that is too small to accommodate them all. Players will seek to earn gold which is the victory point currency, by owning territory areas at the end of each of their turns, or by triggering effects from their races special power. Each game will bring a different set of races and power combinations together as they are randomly combined, making for some really neat or interesting variations. 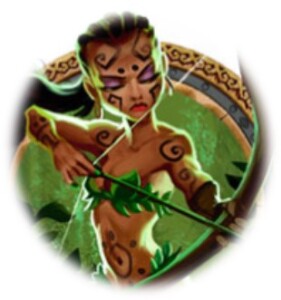 The 14 original army factions include dwarves, wizards, amazons, giants, orcs, trolls and humans, who will use their troops to occupy territory and conquer adjacent lands, pushing the other races off the face of the earth. As each race is combined with a unique power there will be some combinations that will appear better than others, so selecting these at the right time is important, even if you pay extra for them. However, none of the races will dominate for long as they over-extend themselves, and they will soon enter into decline, and again choosing the right moment to abandon your army in favour of a nice new one is important. The process of territory conquest is really straightforward, using multiple tiles of your own race to exceed the opposing army token count in a location plus any modifiers for the terrain. 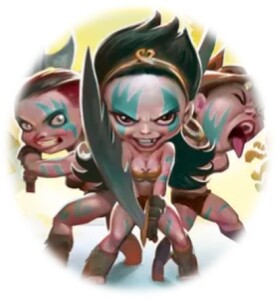 The artwork is bright and fun looking, the cardboard tokens have army images on them, and it looks nice on the map, which does also scale in size depending on the player count. Considering it is a territory control game, this is an easy game to teach and simple to play as it manages to take a war style game and make it fun, and there will be no dominating control as armies all have a shelf life. This works well even with younger players, and as a result has over the years been the most played family game that is in my collection.

An alternative core set edition to the original giving you a choice of where to start collection and a different theme. The armies and powers are cross compatible so owning both is an option.

A couple of more recent expansions add new races and powers to the base game, but also add new board maps in which to fight for control, and are a little more elaborate than the earlier army set additions. Sky Islands features seven new races with flying around the sky islands boards and is a fun addition and really worth a look to change up your game. River Worlds adds pirates, ports and rivers but changes too much of the gameplay really and has no new armies and so is more one to miss really.

There are five small army based expansion packs that add in a selection of new armies and powers to play with alongside or instead of the core set. Your set choice is likely to relate to an army set you like the look of. These include Be Not Afraid & A Spider’s Web (now combined into power pack 1) and Cursed, Royal Bonus & Grand Dames (now combined into power pack 2). I bought 3 individually when they were single items and Be Not Afraid is my personal favourite as it added five good armies and a new storage tray which was so useful.

This changes the board into a hex build your own map style game which adds a lot of map variation, but it will really increase your set up time before you start.

There are other expansions such as Necromancer Island that adds a scenario with central boss creature to fight, and Leaders that gives your army an extra token, and Tales & Legends which seems like the best of these adding random world events to affect your game. All these are fine but may not really improve on the simplicity of the original game.