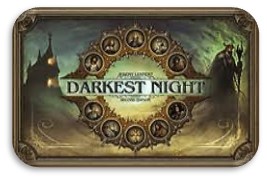 Darkest Night board game has been around for a number of years, slowly increasing its presence via a number of small expansions until in was kickstarted as a second edition arriving in 2018. It is a tactical co-operative game with a fantasy theme setting where characters must stop the evil necromancer from destroying the kingdom.

This fantasy adventure game sees your team of four heroes co-operating to try and stop the evil necromancer who is bringing darkness to the kingdom, which he does by putting out varied blights into the seven areas of the board, representing the different locations of the world. Each hero has a deck of card representing their special powers which they use to destroy this evil directly, or chain effect with one other to help defend the realm. Clever co-operation between characters will improve your chances of beating off the rising darkness track. 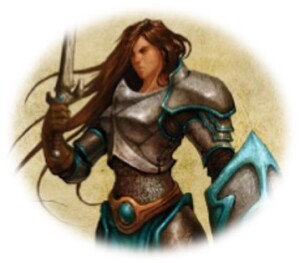 The gameplay is easy to learn and follow but immensely involving, as each character only takes one action each per round such as moving and playing a power card. When trying to clear the blights you will roll a number of dice depending on your skill aiming for 5+ rolls, and your unique powers plus the sparks you collect will enable you to roll more dice to try and succeed, so you always have extra options and can plan ahead. You need to balance defeating blights with collecting clues that are required to obtain holy relics, which ultimately will bring down the necromancer. As the game progress so does your access to new and more elaborate power cards, while all the time a darkness tracker is increasing the difficulty and throwing more obstacles your way.

This game does need a bit of space to lay out the cards, and there is so much choice with 29 different heroes to select from, each having different power combinations, which means that every game can be a different experience, and even playing the same characters will reveal different powers each game. Your party will need some balance of abilities to increase the chances of success. Due to the simple number of actions per round it is easily playable solo with four heroes although there are variants to use two or three if you prefer. 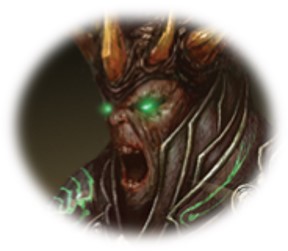 As a co-operative game it shares some similarities with others that include a darkness countdown tracker, with Eldritch Horror springing to mind as its closest match with a similar tracker a dice success roll requirement. Having enjoyed both games i ended up preferring Darkest Night as the character interplay is ultimately much more fulfilling, and whilst the general production of both is very high, Darkest Night has the large tarot sized cards, thick tokens, great artwork, and a board printed in two sizes, with expansion content all built in, whereas Eldritch Horror can become a collectors dream or nightmare depending on your preference. This is one of my favourite solo or two player games which i keep returning to.

This new second edition brought all the previous expansion content together into one package, massively improving the components and artwork and making it have a deluxe feel. The gameplay elements are self contained without expansion content now (my additions highlighted green = own, blue = part owned, red = not purchased) :

There was a limited release of plastic miniatures to represent all the heroes and replace the standees, however the overall miniature quality was not the best around and the standees quality is exceptionally good anyway.