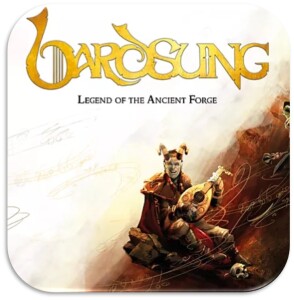 Bardsung is a co-operative dungeon crawler, a standard set up of heroes exploring on an expanding tile map. It comes in a huge box containing five hero characters, hobgoblin enemy mobs, wandering encounter monsters and a large boss creature, and has a really nice presentation to it, themed around the unfolding legendary tales told by the bards. Also inside are plastic trays to keep your tokens and models well sorted, and dashboards for the heroes. It is nicely put together and looks great. If you have the stretch goal fables box then you have access to eight more heroes and extra monsters. 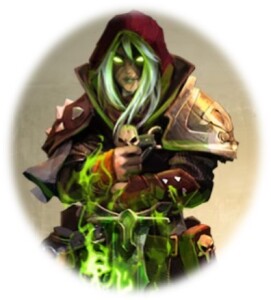 The game looks amazing, the artwork throughout ranks alongside the best i have in any of my dungeon crawlers, heroes and enemy cards are well drawn and have personality. The tiles also look great, being colourful and with great lighting effects and contain zone areas rather than squares, more like Sword & Sorcery, and again these look better than most dungeon crawlers around. Models are good quality, ranking alongside Massive Darkness, but with more interesting sculpts and poses and are overall better than many crawl games, but arguably below the Warhammer Quest and Descent Legends of the Dark lines which are just exceptional. The variety and choice of mobs and wandering encounters in this set is immense and will keep give you plenty of options.

The books that come in this set are lovely, well presented, colourful with great artwork and the adventure book in the main box is a huge 179 pages long containing a campaign, monster encounter information, narrative story passages and options to scale the player count including a one character solo mode. It is one of the best dungeon crawl books i have seen, and may only be beaten by the great Warhammer Quest 1995 roleplay book. An additional 100 pages of narrative one off adventures are located in the fables box, plus the books also contain arena style boss encounters. While monsters are well covered in these books, I would have liked to have had better hero guides as well included which explain the open choice upgrade paths, but these available on kickstarter site so i created my own printable cards > Character Path Cards

The game campaign is themed around hobgoblins, a tweak to the normal that i really appreciated, and there a a number of different types of these enemies to encounter. These are then added to with a host of additional one off wandering monster enemies and creatures during certain missions, or can be involved in their own one off narrative stories. The variety of content here is great, you can select the type of game you want to play from a number of options such as following a campaign story or simply getting through a dungeon to the other side, and the game also has scaling rules to allow you to play with less than four heroes, and even an option to solo with one character. 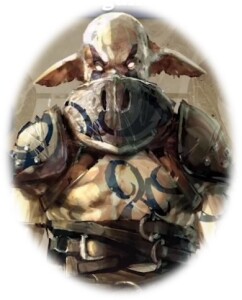 Gameplay is not overly groundbreaking, each hero comes with their own weapons and abilities plus a number of roleplay stat modifiers (things they are good at) which help mitigate test rolls. Characters will move around the dungeon tiles and attack mainly using a 20 sided dice with modifiers, but with weapon damage after a hit being checked for a critical hit using different dice types. Heroes and enemies do not have many wounds, and each successful attack will generally only deliver one or two, so everything is quite tight. Overall it is simple style on a par with Descent, a bit deeper than Dungeons & Dragons adventures but less complex than Sword & Sorcery. Initiative order is completed by a card track, and enemies use a pack of relatively simple engagement cards so you know how to act and who to target, and the colourful tiles are zoned which eliminates much of the annoying line of sight issues seen elsewhere.

Adventures are semi random, in that you will draw rooms and corridors which spawn enemies from shuffled decks, and you will have challenges and battle effects also drawn from a deck, however the game does pre-build these decks for each adventure, giving each chapter a coherent story theme flavour. It is one of the better implementations i have seen, and within each run every battle does offer up some minor environmental adjustments to alter tactics. The potential wandering monster pool, spawned by an echo mechanic will also change between games.

There is a lot of upgrading choice, where earnt xp enables you to obtain new abilities, either from your own character path or even one from another hero, upgrade existing skills to an improved level or you can increase your general skills which will affect test rolls. Weapons will potentially recieve forge upgrades from the campaign story, but gemstone treasures you find can also be added to weapon slots to improve them. Gold is generally used to refresh healing potions, toolkits or charms which will get used up during your adventure survival.

Overall this game is a great looking dungeon crawl box, better than most and with narrative content that can lift the experience, and in this respect it sees off less substantially written games like Massive Darkness. It is not overly deep in rules though, so you will not be overly bogged down by enemy reactions and if you want more complexity then you need to look at Sword & Sorcery or Middara. It is a fun game rather than deeply strategic, however relative positioning to monsters and other heroes is important which adds some depth, and whilst the game has similar issues around repetitiveness that almost all crawlers have, this does have a lot of options and a better narrative to explore. Despite the over lengthy campaign, which definately could have reduced the number of runs needed per chapter, it has become one of my favourite dungeon crawl boxes due to its presentation, a smooth easy to play style, but with just enough conditions, modifiers and upgrades to keep the interest, and dungeon runs that individually are quicker to play than most crawlers.

There are expansions you can add to enhance the gameplay and visual appeal (my additions highlighted green = own, blue = part owned, red = not purchased) :

This was the extras kickstarter box and is certainly the most useful addition you can get. It has eight new heroes, new skills and equipment and loads of new enemies including notably a hobgoblin with lantern and the cave shark. The extra adventure book is 100 pages and contains new narrative storylines and one off scenarios. This is an awesome box.

A gameplay expansion covering the deeper dungeon levels with a mechanical constructs theme and additional adventures, and as such a great addition if you want even more content. I do regret not adding this but there is so much in the core box already. I will likely add if this ever goes back to kickstarter.

Custom cream and orange dice that look nice, plastic doors and terrain pieces, together with a neoprene play mat are all available. Whilst these are generally nice to have they do not really make the game better, and only the doors for me give any real value to separate the rooms. You may already have these kind of items from other dungeon games you could use.

If you want a deeper storyline audio read to you with atmosphere then this could be a neat addition. For me it is not something i would go for but its a nice option.