A Life Of Dungeon Crawling

One Friday evening in 1995, i stopped by my local Games Workshop on my way home from work with some time to kill, and there on the shelf was a large box called Warhammer Quest. I looked through the contents and learnt it was a type of roleplaying game with models, where you took the role of a hero character and played co-operatively to defeat a dungeon. This really sounded like a game made for me, and whilst i liked the Warhammer world, i had never taken to army collecting, and so I bought it home that day. Over the next few months i collected expansions and White Dwarf articles, learnt how to paint, and began my love of dungeon crawling.

The trouble with the original Warhammer Quest was that it was so good, it had varied models, a real feeling of exploration and adventure, great quality tiles, a roleplay book, and you could go into town and level up your hero or add in new monsters. When it ceased production i found i still yearned for new material, and like many others i began to try other dungeon crawl games. This largely became a fruitless quest, as nothing quite lived up to this original, and while other games excelled in certain areas, they often changed the way i loved to play. I owned Heroquest during this time, which required an overlord player to play against, which generally felt like a different experience, but it was still a good game. 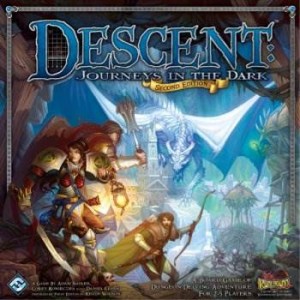 Following the birth of my son in 2002 i took almost a decade long break from board gaming collecting, before returning again in 2013. Descent 2nd Edition was a real factor in this, a well known brand from Fantasy Flights that even made me paint models again. It was a great game, improving itself with the co-operative scenario packs and then the road to legend app, i was back collecting expansions, and this became a new favourite dungeon crawl for a long while. I also tried a few other miniatures games around this time including collecting Hybrid by Rackham, a competitive skirmish game with an excellent backstory. I then dabbled with the Castle Ravenloft and Wrath of Ashardalon, a lighter, quicker, fun but slightly less satisfying co-operative game compared to Warhammer Quest. There has been a list of miniatures games i have bought, tried and sold over the years.

In 2015 kickstarters begun to change the face of miniature gaming again, with many new more complex titles put into production, mostly arriving in late 2016 or 2017. The most exciting of these were Sword & Sorcery which is very much a story led adventure game, but has all the great attributes of heroes with skills and levelling up, nice models, great tiles and an investment in your character. Alongside this was Gloomhaven which offers up the most tactical dungeon crawling i have encountered, with a map to explore and stories to unfold. It is fantastic and if it had all the plastic monster models to go with it, well that would have been so amazing, but even so it set a new benchmark for group adventure gaming. However whilst Gloomhaven has seen huge playtime in my group, it has not been an ongoing collectable hobby experience which i also love.

The story is still unfolding, as Games Workshop made its recent return with a new brand of Warhammer Quest games called Silver Tower and then Shadows Over Hammerhal.  Players i introduce to this new series have really enjoyed the dice allocation mechanic, and by combining the sets it has produced a nice variety of co-operative campaigns in different settings. Once more the models are the best around and painted up become a set you are really proud of. I have begun to enjoy the hobby aspect of Warhammer Quest again, with some White Dwarf articles to collect too, and my own new ideas forming for dungeons to explore. I am effectively back in 1995 when i had time and energy to write my own quests. There is i hope even more to come from the Hammerhal series. 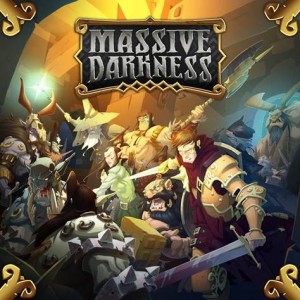 There are more games of course, Dungeon Saga is another game i have enjoyed, with its great box design, but this is again more overlord competitive based in style, and also isn’t quite a match for Descent 2nd edition. Massive Darkness i bought as a kickstarter and is a quicker, less rules heavy game, which works well for one off scenarios rather than campaign gameplay. Darklight Memento Mori is largely a remake of the original Warhammer Quest with a dark soul theme and slightly larger scale, which looks great, although ultimately i prefer the fantasy theme. Shadows of Brimstone should be acknowledged too, but i have always avoided buying due to the western theme, model quality and some apparent overly fiddly rules. Recently i have returned to the Dungeons & Dragons series, having a great time playing Legend of Drizzt with less experienced gamers.

My favourite dungeon crawler changes over time, and will likely continue to do so, it ebbs and flows especially while new content is being released and when i am painting up a new set. You can read more on my current favourite big box dungeon games here > Fantasy dungeon games.