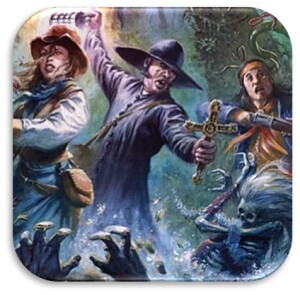 Shadows of Brimstone is a dungeon crawl questing game which was originally released in 2014 with two core sets, City of the Ancients and Swamps of Death. The game world was initially built around the Old West as its core theme, however adventurers can encounter portals which take the party to other fantastically different worlds, which has provided the designers with an unlimited scope for its future development. 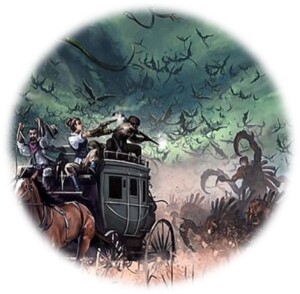 As a pretty standard dungeon crawler you will undertake missions to explore a location and uncover its mysteries, having encounters and fighting monsters on the way, gaining experience and skills as you progress through a campaign.

This questing game very much has its core roots in the original Warhammer Quest design from 1995, in that your dungeon maps are built gradually as you explore from a randomized tile deck, and creatures you fight are also randomly drawn from a themed pool for the current adventure. In addition, between adventures the heroes will visit a town to have encounters, spend their experience and level up new skills, or buy new gear items, gradually getting stronger as the campaign progresses. The gameplay itself is very dice heavy, you roll six sided dice for pretty much everything, including movement, skills checks, combat and defense. This is again similar to the original Warhammer game, and there are no custom dice with special symbols to look up here, something that has become more of factor of later dungeon crawlers.

This is a miniatures game and it comes on sprues, so if you are used to one piece models this may be a little daunting, as you will need to build them. The original game editions were often cited as being on the fiddly side to make, and the overall end miniature quality was not in the top tier either, however the 2020 revised editions of the two core boxes have improved things a little, with better sprues and updated rule books, making this a more interesting proposition. The game also does have good artwork, and map tiles. 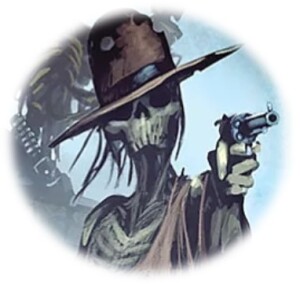 This game mechanically is not particularly innovative or different, being very similar to Warhammer Quest 1995, albeit with a unique theme, some minor complexity additions and an ability to scale effectively for the number of players. This game does offer a huge variety from its three core boxes and a large number of expansion boxes, based on very different world themes, and there is real enjoyment here in creating your own version of this game, building the set you most want from the options available. If you do not own the original Warhammer Quest game then this is a recommended available alternative, as its random map generation and monster spawn approach remains one of the best, and is great fun. After owning and painting up a swamp set i eventually decided to sell and invest more in the newer Warhammer series which has the better models for a hobbyist > Brimstone Painting Journey.

There are probably more expansions to this game than any other i know, where you can add to or change the gameplay. I have only read and researched most of these so any recommendations come from general forum opinions (my additions highlighted green = own, blue = part owned, red = not purchased) :

There are three core sets you can start with, City of Ancients (Frontier/Targa Ancient City), Swamps of Death (Frontier/Jargono Swamp) from 2014 which are Old West themed and have a lot of interchangeable content and Forbidden Fortress (Japanese Fortress/Belly of the Beast), a later 2016 edition which has a strong oriental theme. The two original core sets have also been re-released in 2020 as improved revised editions. There really isn’t a best set as such, but the different theme of the worlds and perhaps the starting heroes may help you decide which one to get. It is often suggested getting two core sets is a great cost effective way to expand, as duplication within the sets are minimal.

Some of the main expansions focus on an alternative world to explore including Blasted Wastes (wasteland), Caverns of Cynder (molten magma), Derelict Ship (sci-fi), Trederra (alien battlefield), Forest of the Dead (feudal undead). These are fairly large expansion sets which start off an alternate portal world outside of the core sets, and again how you expand probably depends on what setting you like the most. Frontier Town is generally a highly recommended expansion that enhances the town visiting side of the game with new locations, encounters, a town map and alternative town types to explore.

These are larger enemy sets, usually tied into one of the worlds that you visit and add new monsters, encounters and cards. These include Masters of the Void (Ancient City), Serpentmen of Jargono (Swamps), Flesh Stalker (Belly of the Beast), Undead Outlaws & Scafford Gang (Frontier) and Shadow Clan Ninjas (Fortress). These enemy packs usually have alternative cards sets for the same enemy to keep things varied and are often at the higher end of recommendations to enhance the particular world you are interested in.

These are mini card pack expansions that generally add new gear or encounters to the card pool.