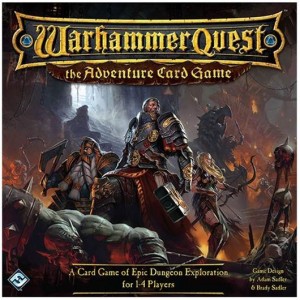 The original Warhammer Quest miniatures dungeon crawl game remains one of my all time favourites and is very valuable now. The Adventure Card Game is an adaptation from Fantasy Flights, which keeps the flavour of heroes searching dungeon tunnels and rooms to complete a quest, but uses a predominantly card based mechanic. The co-operative nature of the game remains at its core, and the actions of your hero need to be intertwined with others in your party in order to succeed.

Aside from the really good set of mechanics, which combine the choice of four action cards with dice rolling to resolving combat, each hero has its own thematic style to work with. From the Dwarf tank to the ranged Elf, the healing Priest and the firepower of the bright Wizard. The artwork for the heroes and monsters is high quality. What really shines is the ability to follow a storyline quest, as your heroes undertake adventures. This is a huge strength with potential for expansions. 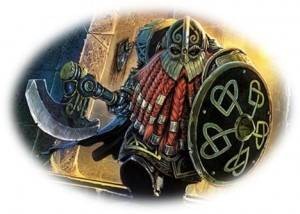 This game provides dungeon questing, with stories and theme, and a good set of character choices it has quickly become a favourite of mine. It is also very enjoyable to play solo by controlling two heroes, and is a quick game to set up and play. Whilst playing with miniatures is always exciting, this game manages to be fast and fun and is therefore more likely to get played. Each quest is no pushover with two heroes and there are enough random elements in the set up to make repeat adventures still entertaining.

Only two new heroes were ever forthcoming with the Witch Hunter and Trollslayer characters, two of the more famous and enjoyable hero types for me thankfully. The official game development has now finished before it really got going, but it is still a great one off game to pick up while you can and there is a lot of fan content around.

I have been writing new quests to help extend the life of this game, originally with 3 starter quests, designed for 2 players to help people learn the game.

I developed two of the starter quests into full adventures and added more themed ones.

Latest News March 2017 : The Lost Forge file and the Tomb of the Undead file have been updated to include new revised cards. Other files have been tidied up a little too. 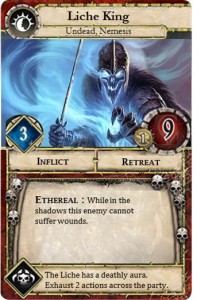 Tomb of the Undead is a tier two adventure and sees the heroes searching the lost crypts for a special artifact. This quest features some new undead enemy cards and has a Liche King nemesis adversary. It is a similar level to The Lost Forge, heroes may undertake one visit to a settlement before embarking on this quest if they wish. The file is currently available here and contains new Undead cards > Tomb of the Undead.

‘Armies of undead skeletons are rising to destroy the land of the living and help is needed to defeat them. Hidden deep within the burial mountains are many lost crypts rumoured to contain treasures forged by the old ones, and which may turn the tide of the battle. Small parties of brave heroes have been sent out and tasked to search these burial chambers to find the tomb of the undead’.