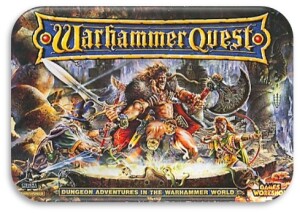 Warhammer Quest was the definitive purist dungeon crawler released by Games Workshop in 1995. It is a co-operative game, which at the time was a rare item, where four brave adventurers enter a random dungeon to explore, fight monsters, collect treasure and complete a scenario objective. This game set the benchmark for all future dungeon crawlers and for many players it has never really been beaten. Unlike most of its kind, it does not require a player to control the dungeon as an overlord. 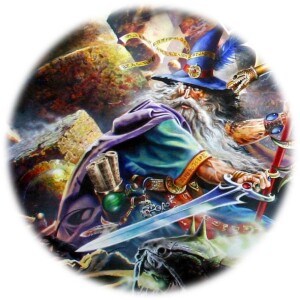 The main set comes with four heroes in the Barbarian, Elf, Dwarf and Wizard, each with different core skills, and a host of amazing dungeon creatures including rats, bats, spiders alongside orcs, goblins and skaven monster groups. Miniatures are early examples of games workshop fantasy but are still good for this type of game. The dungeon tiles are excellent split between corridors, small rooms where events occur and larger objective rooms which are usually where the showdown finale takes place, and they still stand up visually well with today’s game standards. The dungeon lay-out was discovered as you progressed from a random card deck, and the monsters you encounter are similarly random draws, so every adventure was a surprise as you only really knew your main quest goal.

Each hero character had its own skill and item of equipment to start with, but would collect new treasures, and after each adventure would retire to the local village to upgrade if they had earnt enough experience from defeating monsters. This is where the game gets so much praise as time was invested into developing your adventurer. The large core box also came with a stunning roleplay book, which had a bestiary guide to enable you to add so many other creatures and monsters, and really built upon the game basics with new ways to enhance the game. It was pretty close to being as good as any dungeon and dragons rules book and its depth has never been matched in any subsequent board game. 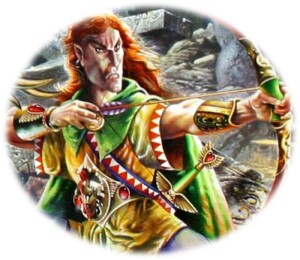 Combat is largely undertaken by rolling a six sided dice with modifiers using a weapon skill on a small chart, a successful hit would cause a separate damage roll comparing strength v toughness. By more recent standards the gameplay remains fairly light and lacks some tactical depth now seen, but this does not matter as its greatest asset is its freeform questing experience, where you never know what encounter will happen next, and your imagination takes over to create the storyline. Given all its randomness, the difficulty could be very swingy and the power rolls each round are legendary. It remains arguably the greatest entry level dungeon crawler if you can find a copy, which will not be cheap.

The expandability of this game was almost limitless with so much fan based content around and all the official releases, which this will focus on (my additions highlighted green = own, blue = part owned, red = not purchased) :

Lair of the Orc Lord

This was the first adventure expansion which continued the heroes storyline with pre-written adventures for levels 2 or 3. This has an Orc dungeon setting that is thematic and brilliant, with an orc boss and a shaman, extra orc guards and a squig hound. If you managed to get a copy of this then you are very lucky as it is very hard to obtain now, and is probably the most important expansion you can get, given it provides an easy way to continue playing with your heroes after their initial quests. It also expands upon one larger quest from the original roleplay book.

The second and final adventure box set was the undead world. Again this is dripping with theme and storyline and this time the pre-written story was for level 5 to 7 adventurers, and is therefore much harder, requiring new extra monsters to help fill the dungeon at the right level. It also remains a highly sought after item and is a beautiful pack, and is generally considered another essential expansion. 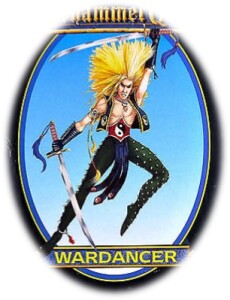 There were 9 official hero characters released with their own boxes, cards, equipment and rules. These included Pit Fighter, Warrior Priest, Imperial Noble, Elf Ranger, Dwarf Trollslayer, Chaos Warrior, Wardancer, Witch Hunter, Bretonnian Knight. If this wasn’t enough a few more characters were developed and released as print and play rules such as the Halfling Thief and Kislev Shaman. The boxed ones are more than enough to collect in reality, and it is hard to pick out the best ones, as different characters will simply appeal to each player. My personal favourites are the Wardancer and Witch Hunter.

Many important articles on how to enhance the game were published in the magazine called White Dwarf. I do own all of these and would recommend the following as the best ones to find first to expand your game.

Into the Depths (WD192) – 3 new board sections, a collapsed passage, stairwell and dead end

Three card packs of 54 treasures each were released to enhance the variety of the item you could find on your adventures. More than you would ever need really. There was also a blank event deck pack which enabled you to create your own encounters and monsters to shuffle into the encounter deck which were a great idea.

A series of 3 magazines collected together some of the alternative content from citadel journal magazines and other fan projects into nice bound volumes.

Caverns of the Beastmen

There is a huge amount of fan content around, and my own scenario i wrote 20 years ago is now available in pdf to download, a quest which made the citadel journal 32 edition,  now reworked and improved a little > Caverns of the Beastmen