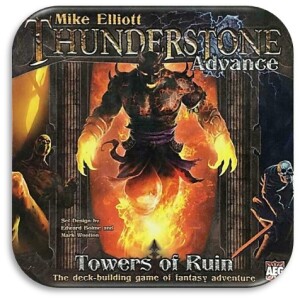 Thunderstone Advance was released in 2012 as the second incarnation of the dungeon themed deckbuilding game, and was fully compatible with the original. It came with new card design, and its excellent artwork style was still similar to the original with a slightly dark and menacing feel, with cards being really good quality with a linen finish. It is a competitive game design rather than co-operative, scoring victory points which are compared at the game end. 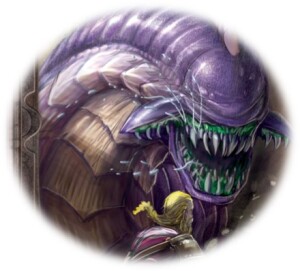 At the start of the game you will set up your village containing heroes you can recruit, and weapons, equipment and spells you can buy to improve your card deck. You can randomise this or tailor it to your preferences. Similarly set up a dungeon deck using three enemy types of increasing difficulty to provide some game progression as your deck improves.

Mechanically this is a pretty standard deckbuilding game but with a dungeon crawl theme, drawing a hand of six cards each turn, requiring players to recruit heroes and upskill them over time, buying new weapons, items and spells from the village to help defeat monsters that dwell in a dungeon area. Each turn you choose whether to visit the village or the dungeon, and defeating an enemy will bring the card and its victory points into your deck, usually providing a gold benefit or occasionally a special ability on a future turn, although they will damped you deck from its full potential. 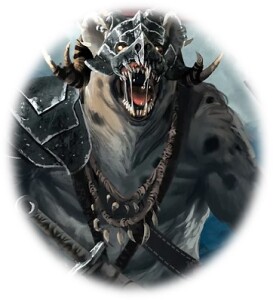 This is a great deckbuilding game, and a brand that has been in my top ten games since its release, and whilst it continued to develop into Quest, if you want have a simpler style of game, more focused on buying equipment and levelling up, then Advance will offer you the quicker set up and speedier play. Also its artwork style is very different to its future version and in many ways remains preferable to me. It remains a card collection i want to keep and whilst i think the Quest game is better, my teenage son still prefers this ones more straightforward approach.

This game had some boxed expansion to develop the collection (my additions highlighted green = own, blue = part owned, red = not purchased) :

The game originally was released as Towers of Ruin but later on another core box called World’s Collide was added with a completely new card set. While you can choose which to have as your core set, given all the cards are interchangeable there was a lot of variety provided by owning both sets with only the initial player decks being duplicated.

A medium size box expansion contained new allies, six new monster types including vicious burrowing worms, horrifying bat monsters, and regenerating subterranean trolls and three thunderstone bearers. Its core theme was that dungeon monsters could carry treasure and use it against you, but when you slay them you can claim the treasure and use it within your deck. A good expansion as gaining treasures is fun.

A medium size box included new heroes and village cards, and added a co-operative rule set with a poster type map which was a passable option i never really took to. New monsters included scavenger gnolls, incarnates and thrall summoners. It also reprinted ambusher cards from previous boxes to improve their readability. The core theme was to hand out corrupting curses and also ways to dispose of them.

A medium size box which brought back missing heroes and monsters from the original version of the game into the new art style and completing Advance as a full set. It also adds 4th level heroes which is a good addition. As i did not own the original this held little nostalgia value but was a nice box of new content to add variety. It kind of sits better alongside the Worlds Collide set which is where i keep these cards.

A smaller and more streamlined core box starter set with some new heroes, village cards and enemies, and a cheaper way to simply try out the game, but it comes without a board to play on. It is miss-able if you are not a completionist, and better to just get one of the two main core sets, as you will be wanting more variety anyway.