Sword & Sorcery is now over three years old in my collection and the core set painting project has been very slow, and begun back in July 2017. Ecarus the knight, my favourite hero model from the set, as i like tanking knights, and i went for a pretty standard blue and white look with edges of bronze. Following this was Shae the rogue assassin, where i used a purple outfit to try and reflect her shady status, and again i added some bronze features for consistency.

Auriel the sorceress enchantress, more of a wonder woman of the group was painted in bolder colours, with red cloak and boots and wild blonde hair. Thorgar, the dwarf was painted in bronze, orange and black, and with a huge rune hammer, this is another awesome model.

Laegon the elf archer and his wolf companion Fenric completed the initial hero set in a green themed woodland style which is my favoured elf faction, and his pose is really nice. I am pretty happy with how all the heroes turned out and am generally impressed by the models which, despite some softer weapons, come out well painted.

Amazingly there are an additional nine more heroes you can add into your base game as expansions, and so i chose a trio of favourites to paint in 2018. Ryld the Blademaster was added in purple with brown hat and boots and with a grey cloak, and another great action pose. Skeld is the dwarf barbarian berserker hero, with two axes and furs and very solid looking with much more skin on show than the others. Kroghan is an armored barbarian warrior from the north lands, complete with armor, skulls and furs.

Painting enemies are always more of a challenge to get motivated for, as you have to complete multiple models. In Sword & Sorcery, each group consists of five models which correspond to the enemy difficulty level, two green, two blue and one red leader, which does at least lean towards some painting variation so you can differentiate. My preference was to add these colours to the model rather than make them uniform and shade the base edge. During 2018 i completed the first two groups that appear in the storyline, the gremlins and raiders.

Time slipped by fast and I did not paint anything from this game in 2019 as i focused on painting Blackstone Fortress, however approaching summer 2020 i returned to the set to try and get the Act 1 base models completed. Starting with the Orc warrior group that have a more static pose, they look better once painted up, and this game really starts to shine when the paint is added. I went for a brown leather armor look rather than metal, and also gave the two green ones black leather for a different look.

On to the two bosses, the troll was next and has turned out to be one of my favourite models from any game, i really enjoyed painting it. I went with a blue and turquoise colouration with brown bone like growths, and as it was a boss creature rather than a group mob, i added grass to the base.

A quick diversion to complete another extra hero character pack, Samyria who can shapeshift into bear form, which is really neat. I went with a largely brown colouration here which came out pretty well.

There second core set boss is a well armored Orc with a two headed axe weapon and a nice mix of armor layers and textured cloak which paints up with good effect.

And finally the Orc Shaman group, who took longer to paint than they should have, as i still find painting five model groups a little onerous a task.

The core box is now complete with a few extra heroes also done which was the main goal this year, although the job doesn’t end here as there is another whole storyline to do, and two side missions in Arcane Portal and Vastaryous Lair. I have completed the the multi headed hydra and his guards here > Vastaryous Lair

Next i added more hero expansions, the set called Onamar beings a wizard into the game along with the two creatures he can summon to help him. I decided to make them into fire and freezing infernals, and these are a really nice addition. Given the Arcane Portal expansion has similar models i went with a black / grey look with bronze armour which hopefully will differentiate him enough from the green, blue and red enemy versions. For the draconian hero i went with a more natural brown rather than the more colourful skin of the Vastaryous guards. 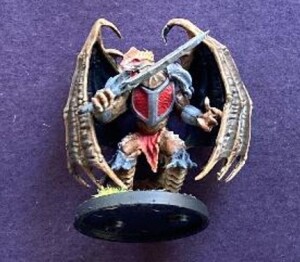