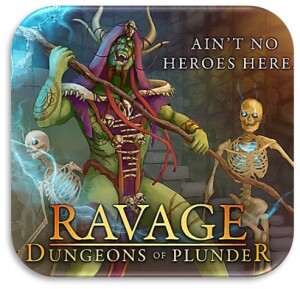 Ravage is a smaller box dungeon crawl game released in 2018 which features standees instead of the usual plastic models and cards to generate the map rather than thicker floor tiles. It has various options of playing the game including a competitive treachery mode, but is most successful as a co-operative or solo game. 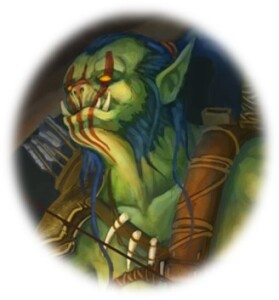 In Ravage you will unusually play as an Orc hero, with four to choose from, a berserker focusing on frenzied attacks, a shaman who can transform into a raven or a bear, or cultist who drains life and summons undead and headhunter who uses poison and flaming arrows. Each hero has a nice board and a set of weapons and ability cards that require energy to use, unleashing devastating attacks on the enemies. Spent energy also turns into experience which will enable you to level up your ability cards by turning them over to a stronger side. You will also be able to buy new equipment from the dungeon resident goblin.

There is a good selection of monster types in the game, represented by standees, which come in different levels. There are boss monsters too which have their own actions deck to spice up their combat styles. Dice combat is light in it’s complexity, rolling to hit or instead generate the energy you need for future improvements, with enemies rolling similar dice as defence to block attacks. 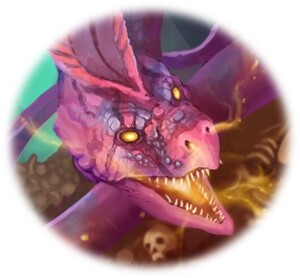 Dungeons are randomly built by drawing from a deck of cards each turn as you explore, with corridors and room cards, there will be the usual traps to find along with extra event locations such as healing fountains or energy shrines. Some important locations such as the snake pit are created by combining a number of cards to make a larger room. The game comes with eight quests in the original box, however as a further development a couple more were made available by download with connecting storyline, and shows ongoing game support from the designer.

This game is great if you want a quicker dungeon crawl on a smaller and cheaper scale and without all the plastic miniatures. The gameplay is not overly deep, although quests are varied and fun to play and what really makes this game special is the artwork style which is especially good throughout with neat logo symbols on the card backs and great monster drawings.  Overall this type of dungeon crawl game comes up against strong competition, and i never really felt as engaged with my Orc heroes. It is a good game for those wanting a lighter experience but it is up against the fine Dungeons and Dragons sets such as Wrath of Ashardalon or Legend of Drizzt which may have more overall appeal.