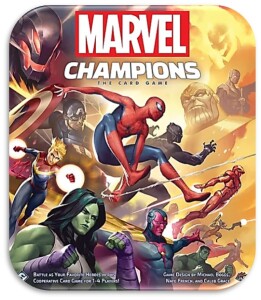 Marvel Champions is a living card solo or co-operative deck construction game released in 2019, where players will take their superhero and aim to thwart an infamous villain. The core box comes with five initial heroes, Spiderman, Iron Man, Black Panther, Captain Marvel and She Hulk and three villains to fight with Rhino, Klaw and Ultron which offers a lot of mix and match variety from the outset.  The fact that Spiderman and Iron Man are probably two of my all time favourite comic characters means that this set started me off nicely. 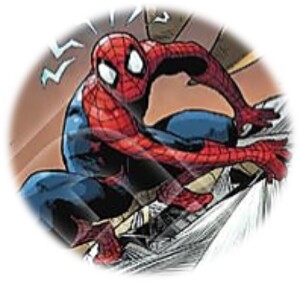 In this game you will construct your support deck of cards before you start, which is different to in-game deckbuilding where you improve your deck during play. Each superhero comes with their own 15 themed cards they always use, and you will top up to 40 by choosing one of four aspects to play as with aggression, justice, leadership or protection and adding in cards from that chosen deck alongside some other basic cards. This means that each hero already has four different ways to play, sometimes increasing existing strengths or alternatively compensating for weaknesses. Suggested starter decks are provided, and even after you have expanded your game collection, this is a much easier deckbuilding concept to keep on top of compared to the infinite choices of Lord of the Rings or Arkham Horror LCGs, and overall this is a good thing in reducing the set up time.

As is usual for this type of game format, you will draw a hand of cards each round, which varies depending on your superhero, and you will need to use the resources on one or more cards to pay and play another, so there is always a pay off decision within your hand each turn. Cards you play will generally be a combination of immediate impact events, ongoing support such as allies or locations, or attachment upgrades which boost or limit other cards already in play.  The villain will fight back with their own encounter deck, spawning allies, upgrading or adding side schemes to distract you, and will be looking to defeat you either by knocking out your hero or completing their main scheme. 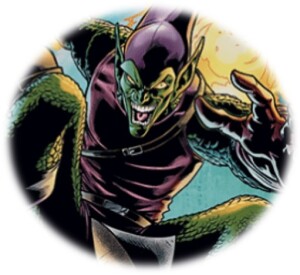 There are a couple of unique ideas in the game where you have alter ego and hero forms which you can flip to and from when you need heal up, prevent attacks or draw more cards instead of being more active in the hero attack mode. Then your hero has a nemesis, such as Vulture for Spiderman, who can appear at any moment to cause untold grief, just when you least need it. These are spectacular ways to generate the comic book feel of your character and are great design additions especially if you can really identify with a particular hero’s back story. The core cards for each hero really do bring out their key attributes making the superhero come alive in play.

As a collector of Lord of the Rings LCG, this game offers a similar experience but with an easier style and a cut down deck construction requirement, but one that still offers some choices. It is more focused on a combat battle, and feels in keeping with its comic theme, being great at providing the experience of taking the role of the superhero of choice, complete with themed attacks and abilities. Despite my investment in Lord of the Rings, i am finding myself expanding this game too, so here are thoughts on the heroes i have played so far > Marvel Champions Heroes

There are many expansions you can add to enhance or change the gameplay as it is a really well supported game (my additions highlighted green = own, blue = part owned, red = not purchased) :

These bigger box expansions focus on a campaign theme with two new heroes, and a number of villain scenarios to play. Content value wise these are likely to be your best additions if you want a lot more variety, however the general villain theme or heroes included may sway your preferences. Rise of the Red Skull was the first themed set and includes the heroes Hawkeye (leadership) and Spider-Woman (aggression/justice), followed by Galaxy’s Most Wanted featuring the Guardians of the Galaxy crew of Rocket Raccoon (aggression) and Groot (protection), and generally is the least rated campaign box. The Mad Titan’s Shadow faces you off against Thanos and the Black Order and has the heroes Adam Warlock (all aspects) and Spectrum (leadership), if you have heard of those, but does have some great enemy deck ideas. The next release in 2022 is a Spiderman themed release called Sinister Motives which to be honest for theme alone is going to be a must have for me.

These will potentially be the most eye-catching, with their unique hero cards and a pre-build deck based on an aspect pack, plus some other new cards to use across the four aspects. The choice you make here may come down to the heroes you know, and mechanically there are some that you may find play in more interesting ways. The releases so far grouped by the pre-built aspect deck they focus on are :

The villain packs focus on adding new game or story scenarios for your heroes to fight against, and there are no heroes in these sets. The Green Goblin is likely to become an essential purchase for any Spiderman fans like myself, and fits well alongside the core box. The Wrecking Crew comes with a group villain approach but generally seems less enticing. The Once and Future Kang features an interesting new timeline approach to the villain. The Hood comes with an entire crime empire and has nine modular encounter sets to expand any villain set up, which seems a good value addition.

There are a number of neoprene player playmats you can find for each of the heroes, or one larger multiplayer mat, however these do seem a little bland and i do not see these as anything particularly special.