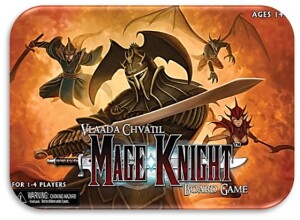 Mage Knight is an exploration adventure game considered by many as the ultimate solo adventure game. You play as a mage character exploring across a revealing hex map who over time levels up, strengthens their powers and recruits followers in order to achieve their objective, chosen at the start of the game. It has light elements of deck building, with just a few cards added during the course of an adventure, and its main mechanic is to manage your hand of cards, initially six, drawn each round, to its best potential, using mana or crystals to boost or change the cards powers. 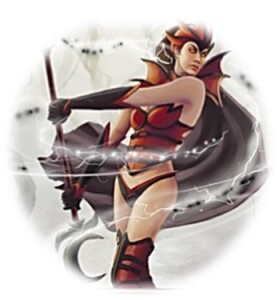 For a non kickstarter game, the components are very good with decently painted models, although i would have preferred to do my own, nicely illustrated hexagonal tiles and excellent card art, some of my favourite in any game. My only real desire for improvement would be that the monster tokens really could have been bigger sized discs, or have accompanying cards to make their artwork and threat more apparent.

There are four mages in the original box, with each using a largely common deck of cards apart from one or two exceptions specific to their own unique skill, and they also each have different upgrade paths through their skills tokens. There are some really neat ideas in the game, day and night modifiers will change how easy terrain is to cross and how some monsters reveal. Mana is also available to tap into, with dice rolled at the start of each turn, it can be converted into crystals that stay with you, and these will combine with your cards to give you special effects, building on the core actions such as movement, influencing, attacking, blocking or gaining mana. Combat is a complex affair with range and siege aspects to consider, plus elemental modifiers for fire and ice, and here i would have enjoyed an optional simplified version that was less brain taxing. 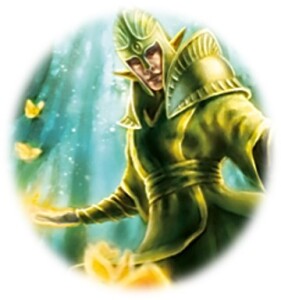 The game is a puzzle and an adventure rolled into one package, and it is so satisfying on one hand but extremely complex on the other. It really will take a few reads of the difficult rulebook, and attempted plays or videos watched to get a feel for it, and even then the many little combat modifiers rules are especially tough to remember each time. This game has been in and out of my collection, returning again with the ultimate edition which finally made me stick with it. I really do find the hand management choices it brings an addictive experience that can be so rewarding. The gameplay is also long, however i do have a lot of fun running simple quicker missions such as liberating a mine or two, or finding a tomb to explore, playing out my own imaginative story. It is a classic game for good reason, but for me can go in and out of favour, and i would only ever solo play it.

There are expansions you can add to enhance or change the gameplay although these are all wrapped up in an ultimate edition now (my additions highlighted green = own, blue = part owned, red = not purchased) :

Two smaller box expansions added in new playable mages, Krang, the mysterious and dangerous Orc Chaos Shaman, and the forest dweller Storm Druid Braevalar.  Both packs bring in some extra monsters and scenarios to play and given mages are the most interesting part of the game these are great additions, adding more content without making things more complicated.

This is the big box expansion, adding in an enemy boss, General Volkare and his Lost Legion to play against with their own automated actions. It also includes a new mage knight, Wolfhawk plus new location tiles, enemy tokens, unit cards, artifacts, spell cards and and extra unique card for each of the other mages. It is the most important expansion if you want more content and do not have the ultimate edition but does add more layers of complexity.