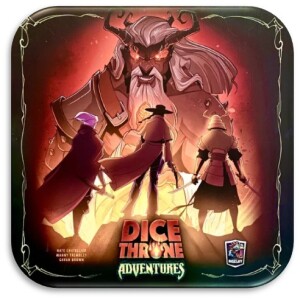 Dice Throne was originally a competitive dice battling game based on the yahtzee three roll mechanism to activate character abilities and wear down your opponent. The adventures box is a co-operative expansion upgrade that turns it into a dungeon crawl experience with minions and boss battles, wrapped together by a simple campaign to beat four bosses. 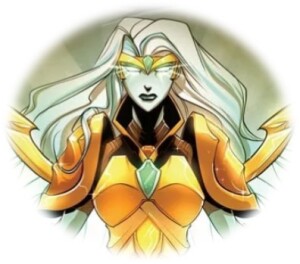 The core of the game revolves around your chosen character, who have beautifully drawn boards which show their various abilities. These can be triggered by rolling five dice, looking for combinations of symbols such as swords, hearts and explosions or numbers from which you can build straights. These board located skill combinations are further supplemented with a unique card deck for your hero, which will enable you to take extra actions such as manipulate the dice rolls, upgrade your board abilities or inflict and remove status conditions during your battles.

The adventure game has a campaign over eight rounds to battle through progressively more difficult dungeon crawl style portals, fighting minions, with each one followed by one of four bosses in turn. After each game you will be able to buy new loot cards that you have collected to enhance your card deck, thus slowly increasing your gameplay strength as you progress to higher portal and boss levels. It works really nicely, and the alternating games of dungeon crawling and boss fights break up the play and provide different gameplay experiences.

In terms of how i categorize my games, this one could sit across all camps as it has become a real mix of dice rolling, dungeon crawling and light deck building, and is also family friendly, and of course you can still play it as a competitive battle as originally designed. There is a lot of versatility here, and the 16 currently available characters are all pretty enticing and offer different types of skills and ways of playing. The artwork and production of all elements of this game are amazing, with neat dice trays and bold artwork colours making the game pop. There is a lot of variation in trying new character combinations too, with variable loot acquired each game, and different portal set ups and random decks for minions. Of course more minions would be most beneficial in the long run, but all the hero characters, if you can afford them, offer a lot to work through and come with varying complexity levels so you can always find one to suit your mood or skill level. 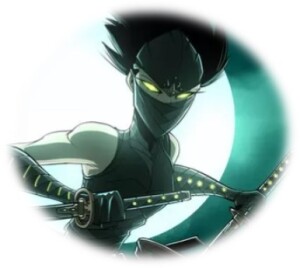 The game can be considered a little repetitive in its three stage dice rolling aspect, as you are repeating the same process, however the card decks and status effects add enough depth to keep you thinking strategically. It is also not an easy game to beat by any means, so it does offer a challenge, but its easy to play mechanics and really fun dice rolling make it a great experience. The campaign ties things together, but is not story led, and there is a points system to compare how well you completed it, but this was not really of interest to me overly much, as beating the game is tough enough to become the only challenge i need anyway. It is not a full on brain burning game and has quick set up which in reality means that i am likely to play it more often than my more complex ones. It is simply a fun experience solo or co-operatively, and it does outshine other similar dice rolling battling games i have tried such as King of Tokyo, Roll Player or One Deck Dungeon.

This review is of course based on owning the expansion Adventure box, but note it is not a stand alone product as such, and you will need at least one hero pack of two characters to play it. If you already have characters from the original competitive battle game, then adding the co-operative adventures comes with a very high recommendation.

There are two big season boxes you can buy called battle chests, each containing a set of eight heroes. If you are confident you like the game and want a lot of characters, then this is the cheapest way to add heroes in bulk. However heroes are also available in sets of two, which enables you to pick and choose to a certain degree and build your collection in more bitesize chunks, which is a really nice option. The hero list so far are Season One > Barbarian, Monk, Moon Elf, Ninja, Paladin, Pyromancer, Shadow Thief, Treant and Season Two > Artificer, Cursed Pirate, Gunslinger, Huntress, Samurai, Seraph, Tactician, Vampire Lord

These include painted models to replace the standees within the game, and then playmats, dice, dice tray and card sleeves. None of these are essential really and models only really track your progress through the dungeon area. I would spend on more character packs first.