Blackstone Fortress was the third in the new series of Warhammer Quest box sets, released in November 2018, and set in the 40k futuristic universe. A group of disparate explorers delve into the labyrinth of a vast and ancient space station to uncover its secrets via a series of missions leading to a final showdown scenario. This game uses the same core dice allocation mechanics found within Silver Tower and Hammerhal, and also has the familiar extra destiny dice rolling each round. However it adds some new and better ideas, such a random activation order using a card draw, which can be manipulated by special skills, and combat dice of different shapes to roll depending on a characters ability. Both of these are great improvements. 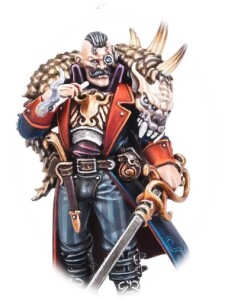 Similar to Shadows over Hammerhal and the original 1995 game, each adventure requires four heroes to play, albeit you can quite easily run multiple characters due to its relatively low turn complexity. The game generates its own enemy intelligence through dice rolling which is like the Silver Tower approach, but here you roll individually for every enemy model which means there is a lot more enemy dice rolling, and it feels quite overbearing. The combat however is better than before, with more range weapons and terrain cover on the tiles, you have more tactical options than before and it makes the game feel closer to a skirmish game.

All the components and tiles look excellent and the model set rivals close to Silver Tower for its huge variety and enjoyment to paint. I really like building these sets, and the futuristic theme of this one is a nice alternative, even if it for me is not going to beat a more old world fantasy setting. The gameplay and depth of campaign is improved over its predecessors, although i do feel the one story quest in Hammerhal was more engaging than the missions here, but of course the replay value is low for that game. It remains an enjoyable and relatively straightforward dungeon crawler, and is also the version that has seen the most expansions and ongoing support via a continuing storyline and secret envelopes to open. This can prove expensive, and i collected some of the early releases before my interest faded a little, which was down to the theme and somewhat repetitive grind required to reach the more interesting stronghold missions.

Playing the same missions can become repetitive over time, so games like this really need expansions to keep them alive, and this was one of the best supported since the original 1995 quest game. Here are the additions you can make (my additions highlighted green = own, blue = part owned, red = not purchased) :

Dreaded Ambull – a huge monster lurks within the fortress, this is a small expansion box which has a superb model and a nice side mission adventure, which can change your ongoing adventures slightly. Opinion > i love huge hulking monsters to fight in a quest mission showdown, and once this box set was released i knew i was going to have to buy the main game after all. Whilst this is quite expensive for a small expansion, the designers through White Dwarf expanded extra linked missions using this box, which for me make it a must have. This kind of monster is what the original set really needed as its icon, and is highly recommended.

Traitor Command – another smaller box expansion with a traitor command leader and a chaos ogryn with a claw arm. These fit really well with the core set guards squads, but may not quite have the same pull factor as the ambull, however the models are very nice additions to the game and are likely worth getting.  Opinion > these characters did not have any additional missions written for them, but they can easily be used with the core set, and it is a really viable expansion that i wish i had bought.

Card Packs – three extra content card packs were released, Endless Peril which adds new exploration events to your deck including 15 more combat maps and 15 encounter challenges. This pack does not seem overly essential for me if you are picking up other expansions but may be useful if you only stick with the core set as encounters could feel repetitive over time. Advanced Arsenal is a smaller pack adding 24 new resource cards and is the more interesting addition card set giving new items and ship cards and has item artwork. Abominable Intellect provides new encounters to increase the difficulty level of the game and mainly adds to the enemy count, but this means you probably have to also consider adding extra models (a core enemy pack was available to buy). Opinion > if you plan to only keep the core Blackstone Fortress set, then these may be useful to expand variety but their overall value is questionable against the other model sets providing new adventure stories.

Annual – is a softback book that brings together all the expansion content from White Dwarf from 2018 to 2019. This includes adding in supporting retinue characters, new precipice rules and a lot of new quest missions including the excellent multi part ambull adventure, and solo rules. Opinion > this was a must have purchase to extend the life of the original core box, and even though i had most of the content already via the magazines, it was such a nice reference book with a good number of new scenarios to play. The ambull adventures in particular are excellent and so this is highly recommended.

This was a natural core set break point, as future expansions developed the storyline with Escalation, and then used contents of that box within the later expansions.

Escalation – the biggest expansion for the game for new content, with new tiles, four new heroes, a machine support retinue ally character, and barbaric chaos warband. It is quite a costly box (ridiculously so on the 2nd hand market), but adding new story adventures and heroes it could be considered better value than combining say a couple of the other smaller expansions available. Opinion > this set is a great expansion to get if you want to keep playing beyond the core set and follow the story into its next chapter. As such it is a highly recommended expansion.

No Respite – the third smaller box expansion bringing in nurgle enemies and plague afflictions to the game. The models within this set were not brand new ones and are a more simple push together style and were therefore less sought after. This box does have a small campaign based around diseases and has some new rule ideas and a narrative side adventure. Opinion > this adds a new type of enemy and is a good box, but not the most essenial compared to the ambull or escalation.

Deadly Alliance – a fourth smaller box expansion bringing in a new zoat retinue ally character rather than new enemies, but has shardquakes to find which change the map layouts, making for a shifting adventure. Opinion > has a neat model, but its addition to the overall game enjoyment is arguably more questionable than other sets such as the ambull or traitor command. Despite offering the zoat as an ally or an enemy it was not an overly essential addition.

Ascension – is the final expansion for the game, and a larger more expensive box similar to escalation. This box is deceptive and not loaded with new models, just two large spindle drones but it majors on a new storyline, hidden surprise content and new ways to play the game including a more random dungeon style approach. Opinion > if you want to conclude your story journey then this is essential, and whilst it lacks models it is packed for alternative gameplay content.

If you did not buy all these expansions at the time you will be paying a very high price second hand. My opinion is that a great set includes Core > Ambull > Annual > Escalation > Ascension which provides the most content value and a complete storyline.