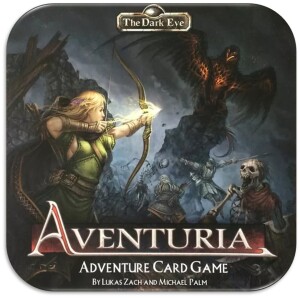 Aventuria is a card based rpg adventure game released in 2016 and comes with various play modes including solo, co-op and competitive duel. It is set in the Dark Eye fantasy world which is pretty generic with elves, dwarves and human heroes and goblins, orcs, bandits and pirates among the main enemies. The dual battle mode sets up one hero against another in a straightforward fight to the death and is not something i am overly interested in, and so this review will focus on the solo and co-operative story adventure side of the game.

The core box has four heroes, a dwarf blacksmith, and elven ranger, a human rogue and a magic user which is a pretty standard set, but ones i would certainly want from my first box. Each hero comes with their own 30 card deck of support cards, along with their main battle card and a skills card which is used to undertake game tests and challenges. Each of the starting decks contains cards which suit the playstyle of that character and makes the hero feel a little different. You can also deckbuild a little within the limitations of each character to optimise your play style, but the pre-built ones are good ones and i have not felt the need to do this.

Once you have your characters set up, you undertake an adventure, beginning with some story narrative which asks you to undertake a number skills tests which will in essence tweak your starting hand or abilities, making the early game easier or harder depending on your success or failures. The narrative will lead you into a battle set up which is the core part of the game, where a scenario leader and his henchmen will enter the fray and your story objective fight begins. You will normally start with a five card hand, and draw two more each turn. You can then play up to two of these cards each round as endurance, effectively your ongoing action points each turn which enable you to use your weapon or undertake a test, however they are also a currency allowing you to add new cards to your inventory by paying the cost. As such every round you will get stronger but also must decide which cards you want to use as action points and which you want to equip or use for instant results. It is a simple mechanism but engaging to play. 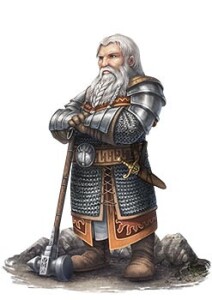 Each round your heroes will attack, and then enemies counter attack using their own dice roll table, with combat using a 20 sided dice where you roll equal or under the skill level required, and equipment can be used to modify your starting roll requirement or add to your dodge or armour defence. Hit damage is largely made using a six sided dice with extra damage given depending on the ability of the weapon you used. A missed attack will provide you with a fate token, effectively a re-roll or extra action for a later turn. Each story will also feature its own event card deck you draw from, and a time tracker which sets up one of four difficulty levels and triggers new enemies or tests in keeping with the narrative text. Some stories also come in multiple acts or scenarios to work through.

Essentially this is a combat game with story flavouring that feels very similar to a dungeons and dragons adventure, with it’s skills checks and combat dice rolls. This is certainly a lighter deckbuilding card game and is also very dice dependent, and it’s closest game rival feels like the Pathfinder Adventure game, which has a little more rules complexity, more dice variation and offers a longer campaign. The card and box artwork is all very nice and components are good enough, albeit a proper board would have been expected at the box price rather than a poster sheet. This game does have a nice easy flow and gives you a quick roleplaying style story and battle playthrough, and whilst the core box alone is fairly limited, expansions have added more adventures, plus more recently two new solo specific modes for the game.

I found this game to be endearing and light, and it made for a nice solo or co-op experience that is easy to pick up and play when you don’t want to think too hard. Ultimately though i have a number of deckbuilding games and and rolling a 20 sided dice continually is a slightly repetitive mechanic, something that Folklore suffered with too, and i decided eventually to keep my older Pathfinder Adventure Card game, which has a similar long term slow deckbuilding feel.

There are new story adventures you can get which include a new hero character with their starting decks and mini campaign to play featuring new enemies and are the highest recommended additions for co-op play. Forest of No Return, Ship of Lost Souls, Inn of the Black Boar and Heroes Struggle are all stand alone adventure boxes with different themes. There is also a dragon fight expansion but without a new hero called Tears of Fire. Then Ship of Stone and Return to the Inn of the Black Boar feature a small follow up add on box if you like these particular expansion adventures, making them more challenging.

There are two new solo boxes that have interesting variations, developing a challenge based location adventure based on entering either a cursed tower in Curse of Borbarad or sultans palace to rescue the Caliphs Daughter. These are great looking additions which i have yet to play, but i bought one to try out. For the solo player these look really good.

These boxes add new themed heroes characters with their own full support decks, a seductive but deadly Veil Dancer, scheming Servant of the Nameless One, a crafty Alchemist and an adventurous Treasure Hunter. If you have a number of heroes already these are optional buys, but if one of these characters really fits what you want to play, then i can certainly see their value.

The are components additions you can add such as the Wheel of Time which replaces the card health tracker with wheels for each character, these look very nice but are not overly essential, a wooden insert for the box, and the Arsenal of Heroes which adds coloured dice and extra hero deck cards to free up your character deckbuilding. There is also a newcomers introduction set Master Tailor’s Poltergeists and a higher player count co-operative challenge Operation Rietholtz. There are also a lot of promo cards from events and kickstarters you can look out for including heroes, companions, equipment and rewards.