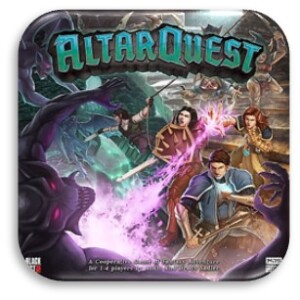 Altar Quest is not specifically on my painting list as Warhammer Quest Cursed City is coming soon, however i am enjoying the game so i decided to make a start on it. My aim is for enough from the core set for two players, which means that i do not only need to paint ever model in the set initially due to the spawn conditions from the threat cards scaling with the player count. Generally i have decided to go with the standard artwork colours, although i may switch up some of the enemies to allow me to use without the base disks.

First the four main heroes from the core set, a varied team of Rowen Loffin an Indiana Jones in hobbit form, and my favourite model in the game, making traps and cooking food buffs, swinging around using his rope, and throwing knives. He is of course not the strongest hero around, but he is great fun. Sedrin Highmoor a cleric character, healing and protecting the group with his prayers. Quella is a part human and bird mage character and Myreen Duvall the armored vampire fighter warrior. Overall a very cool team of characters.