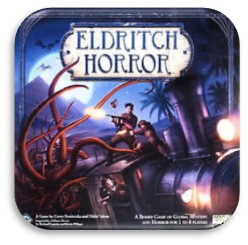 I try to keep a maximum of 40 games with expansions, due to both storage space and funding issues, and so as i invest in new games, i contribute from ones that have had a good run in my collection and are out of favour. I have to be quite ruthless, so this is a list of the games that i have removed from my lists and sold during 2019, with some quick thoughts on why.

Eldritch Horror & Elder Sign – two co-operative games with the Cthulhu theme, i am still really fond of Eldritch Horror and really like the co-operative adventure it brings, and i am sure i will occasionally decide i would like to replay it. It’s card story text is not always joined up in context with the game you are playing, and i prefer Darkest Night 2nd Edition and Runebound 3rd Edition as threat countdown co-operative games for their general theme and gameplay, but I may yet regret parting with Eldritch Horror. Elder Sign is a smaller box dice based adventure game which is just not played much any more.

Spirit Island – this is certainly one of the great co-operative games, a strategy game rather than an adventure i just did not tend to solo play it, as often the win mechanics can feel a little anticlimactic at times. The card play and player boards are lovely though, but as my friend does have a copy we can play, i wanted to re-purchase Dungeon Alliance after receiving the kickstarter story expansions, where i find the card drafting a little more engaging for solo play. So it was a direct swap back as i had in fact sold Dungeon Alliance last year to fund Spirit Island.

King of Tokyo & Jamaica – family games generally get less play nowadays as my son is 17 and my main games group has a lot of competing choices. I really like Jamaica and would always play it, but Flamme Rouge has become a preferred fun racing game in my family. King of Tokyo is a dice rolling battle game which is owned by others in the group, and as it rarely hit my table at home i decided to part with it.

Legend of Drizzt – with the arrival of Sine Tempore i needed to trim my campaign games again. This game has fond memories when my son and his cousins were younger and it is really easy to teach and play in a quicker session, however i have moved onto using the Warhammer Quest series as the best entry point game now, and dropped the Dungeons & Dragons system.

These sales have helped fund the return to my collection this year of Dungeon Alliance and Mage Knight, with a newcomer in Hexplore It and enabled me to kickstarter pledge for Altar Quest, Trudvang Legends and the forthcoming Oathsworn of the Deepwood.